Stumbled on this today. Pretty extensive . . . 595701 characters in the original!

Found that cause I was trying to find a high-quality smear to add to this thread on r/cumtown: FAGGOT 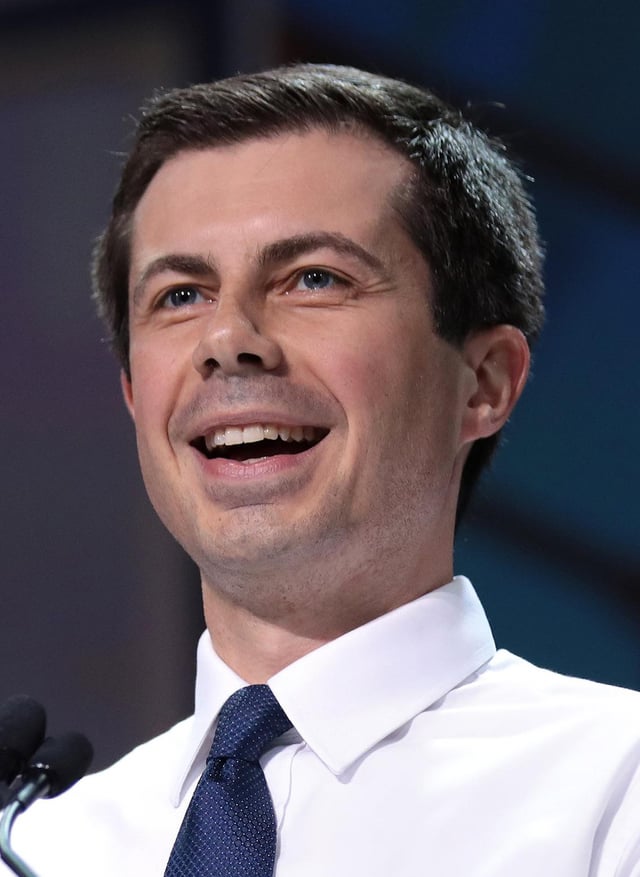 Snowflakes will be literally shaking. Point being: nothing wrong with taking some cock, some really Great Men have been cocksmokers (Frederick the Great, Tchaikovsky, Alexander the Great, uh . . . don't they suspect Richard the Lionheart was gay?). Anyway, being a "Great" or "Virtuous" person is besides the fact of being gay. Being "gay" does not make you great, nor minor. HOWEVER, playing the Gay Card makes you a FAGGOT!
Anthro's NSFW Thread
Top

The "Just fuck my shit up" meme.

Commenting on people having fucked up haircuts on the internet has been a thing on the internet for awhile now, a notable early example being when the rapper Tyler the Creator tweeted on August 13th, 2011 regarding Miley Cyrus... 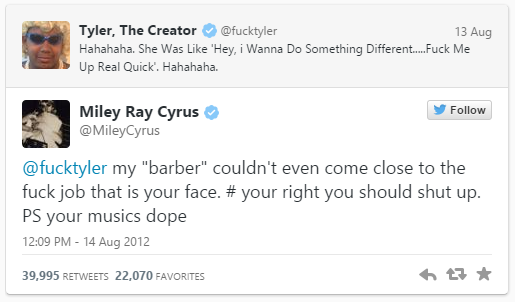 However, it didn't gain meme status until December 11th 2014 when Twitter user @RiqqiXNX tweeted a photograph of an advertisement for Cleveland-based dentist Gino DiGiannantonio, along with a mock conversation between DiGiannantonio and his barber (note this is not a photoshop, it is the guys REAL haircut... 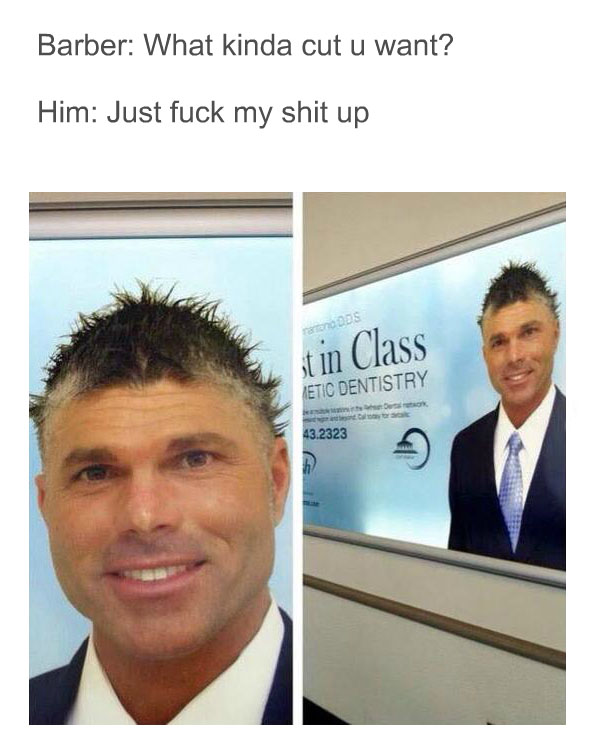 In three months, the tweet gathered over 5,400 favorites and 4,600 retweets, and on December 15th, Redditor DickHardwoodJohnson submitted a screenshot of the DiGiannantonio tweet to the /r/funny[7] subreddit, where it received upwards of 4,900 votes. On December 17th 2015, the /r/justfuckmyshitup subreddit was launched for notable examples of the captioned image meme. On February 19th, Urban Dictionary user holiday1432 submitted an entry for "Just fuck me up," defining it as "putting the fate of your hair into someone else's hands."

The meme really gained legs on February 16th, 2015, with a post made to 4chan's /tv/ board regarding Brendan Fraser, who at the time was struggling to make alimony payments following his divorce. An edited picture of Fraser with DiGiannantonio's hair and the post "I-is he gonna make it?" was submitted, and then quickly spread across the board. 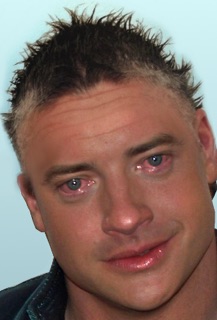 On April 11th, 2015, the board /just/ was created on 8chan for Brendan Fraser-related posts. This began a trend where any person of note who has fallen on hard times is considered "Justed", and edited photos of them with the DiGiannantonio haircut are posted with the comment "Just fuck my shit up" or more usually only "Just." The meme is now popular across the internet and often appears in Twitter threads, so if you come across it you now know what it means.

Yep! There is a whole sub on reddit devoted to fucked up hairdos! Some funny stuff.

Wow, I had no idea that coyotes and badgers actually cooperate in hunting!

Coyote and Badger hunt together

A boomer gives 4chan advice on how to pick up women...

I suspect Boomer Anon is absolutely correct. Females are attracted to confidence more than anything else.
Anthro's NSFW Thread
Top

A Beluga Whale Returns a Woman’s iPhone After She Drops it Into the Water, Hammerfest Harbour, Norway