It's A Bit Windy Out

It's A Bit Windy Out

Britain has been getting a bit of a kicking from Storm Brendan the last two days. I just came back from a walk to Sainsburys, fucking hell lads it was terrifying. On the way there I had the wind at my back and there were times I felt like I couldn't stop going forward, it was like someone had their hand in my back and was pushing me, that made crossing the roads fun.

On the way back it was in my face and several times I was bought to an almost complete standstill, only to have the wind suddenly drop for a second and sending me flailing forward like a right spastic. Time I got home I was breathless, I feel like I have had a workout down the gym.

I might have to start believing in climate change.

Commuters were warned to face a miserable journey home today as strong winds from the second storm to hit Britain in 24 hours caused speed restrictions on some lines while others were affected by landslides.

Passengers travelling between Southampton, Bournemouth and Weymouth were warned over disruption, while there were also delays between Penzance and Exeter, and between London and Cambridge, Ely and Kings Lynn.

Network Rail shut the railway between Horsham and Dorking after a landslip near Ockley in Surrey as further warnings for this evening told of another low pressure system sweeping in after Storm Brendan hit yesterday.

Further 70mph winds into tonight will be accompanied by heavy rain – the worst of which will be in southern England until 9am tomorrow. Up to 1.6in (40mm) of rain could fall in hilly areas and 1in (25mm) at lower levels.

The rain led to tonight's FA Cup third-round replay between Tranmere Rovers and Watford being postponed after the Prenton Park pitch fell victim to heavy downpours for three days in a row on the Wirral which left it unplayable.

The strong winds have also seen delays to dozens of flights in and out of Gatwick Airport, with two Wizz Air flights, four easyJet services and one Norwegian Air flight diverted to other airports.

In Newcastle, barriers were put in place on the city's Quayside amid fears a tidal surge could flood the streets following a flood warning imposed due to high spring tides, strong winds and low pressure in the North Sea. 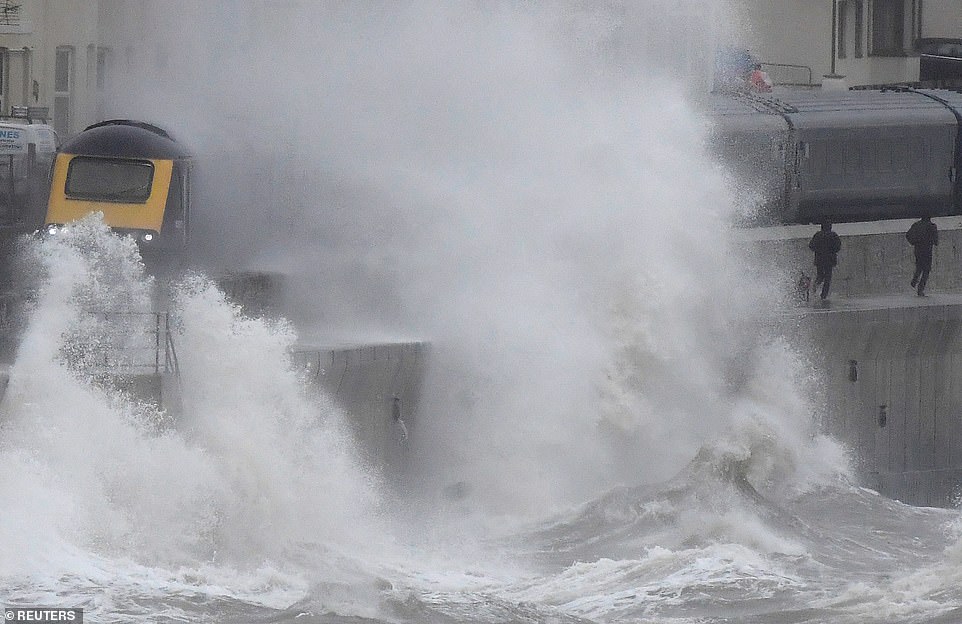 Elsewhere, a landslip between Horsham and Dorking meant trains may be cancelled or diverted. Network Rail said it had a geotechnical engineer going to the scene but there was no estimate time for reopening the line.

It comes after schools were closed and roads blocked by fallen trees in Scotland, while ferry services were hit and train services were halted after objects were blown into overhead power lines by the first named storm of 2020.

A gust of 121mph at Cairngorm National Park in the Highlands was recorded, while a wind speed of 95mph hit South Uist in the Outer Hebrides and 62mph was observed at Capel Curig in Gwynedd, North West Wales.

The only previous named storm of the current 2019/20 season, Atiyah, swept in at the start of last month – and, during that period, winds gusted to a maximum of 83mph at Needles on the Isle of Wight.

Nicola Maxey, of the Meteorological Office, said: 'In the wake of Storm Brendan, we have another low-pressure system arriving from the South West.

'We are looking at wind speeds of 40-50mph inland and 60mph in coastal areas. On very exposed coasts and hills, winds could reach 70mph.'

The worst conditions from Storm Brendan were in Ireland and north-west Scotland, where schools were closed and ferries disrupted.

There was also disruption to roads and railways – with one hold-up on the M7 motorway near Limerick, Ireland, caused when the storm blew a trampoline onto the carriageway.

Today's weather warnings raise the possibility of 'some localised flooding' in southern England due to rain 'falling onto already very wet ground'.

The expected high winds could cause power cuts as well as disruption to 'road, rail, air and ferry travel'.

Miss Maxey said a return to more settled weather is likely by the weekend.

She said: 'It's a blustery week but as we go towards the weekend, we're likely to see brighter, settled days with potential for frost and fog overnight.'

But it is set to become considerably colder, after very mild weather yesterday and today.

Miss Maxey said tomorrow is likely to be dry and bright but with showers which 'could be heavy and thundery'.

A band of rain is due to move eastwards across the country on Thursday, which is likely to be heaviest in the West, followed by showers.

Yesterday afternoon, there were two flood warnings, at Keswick campsite, Cumbria, and on the River Nene, east of Peterborough, Cambs, plus 60 flood alerts mostly covering the Midlands and southern England.

In Stornoway, the Lewis Sports Centre shut five hours early at 5pm due to the worsening conditions, while in Lochgilphead, Argyll, shopkeepers anxiously stacked sandbags at their doors to keep out floodwater.

The A77 in Ayrshire was closed in both directions north of Maybole in the late afternoon after a tree fell on the carriageway.

Last night, Western Isles Council, whose schools were closed for the day, warned that Stornoway town centre was at risk of flooding at high tide. Doctors' surgeries in the town also closed early.

Helen Roberts, of the Met Office, said: 'Brendan has been a particularly powerful storm. The whole of the western side of the UK was included in the warning area but the West of Scotland has borne the brunt of the highest winds.'

She said that after easing last night, conditions today would again be 'very windy'.

Oh its CHANGING alright! Hang around for 24 hours, it'll change yet AGAIN!

It's all part of the master plan.... It just so happens that the prevailing winds in the UK point toward Mecca...

Here the weather is ok. Since the beginning of January it is almost everyday sunny and the temperatures are around 10°C. Global warming is not so bad for the moment.

Doesn't help that I live down the longest High Street in Britain, London Road, its like stepping out into a wind tunnel. Still I had steak and chips for dinner and I have a bottle of cider in the fridge to have later. Worth it.
I could be the catalyst that sparks the revolution
I could be an inmate in a long-term institution
I could dream to wide extremes, I could do or die
I could yawn and be withdrawn and watch the world go by
What a waste...
Top

Part of the roof from a block of flats in Slough got blown into the street, luckily it seems nobody got hurt... 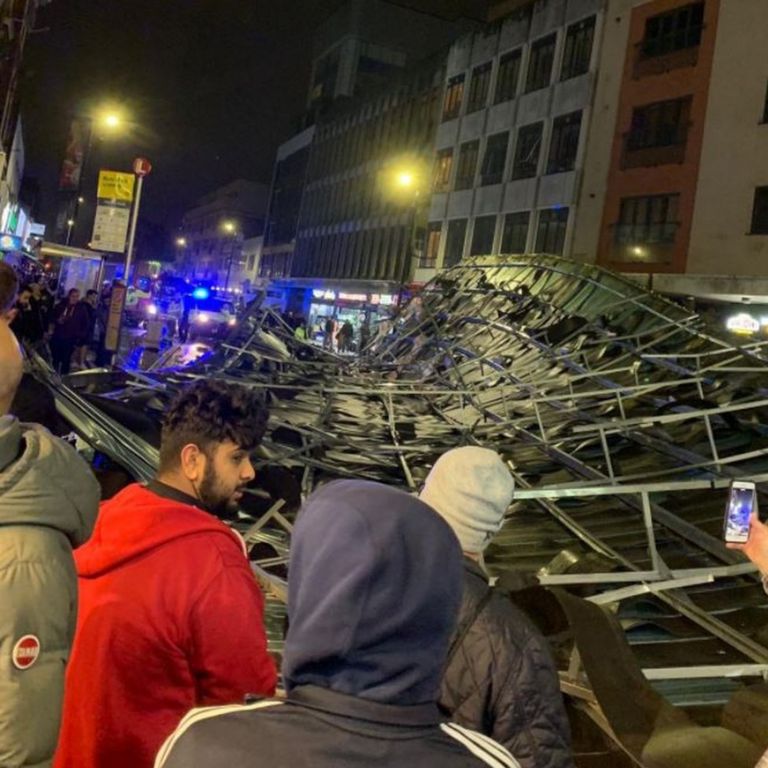 A large section of a roof was blown off a block of flats in Slough as wind continued to hit the UK.

The roof is strewn across the high street and people have been warned to avoid the area.

The road is closed and emergency services are at the scene, though Thames Valley Police said no-one was believed to be injured.

A taxi driver who narrowly missed being hit by the debris said it was "a miracle no-one was killed".

The UK has seen gusts of more than 80mph following Storm Brendan on Monday, with the Met Office issuing a number of weather warnings.

Taxi driver Haris Baig, 30, from Slough, said his car was only metres away from being hit by the falling roof.

"At first I thought it was scaffolding, but then I realised the whole roof had come down," he said.

"There was a massive amount of noise.

"I was about 15 metres away and slammed on my brakes. I got out to see if everyone was alright.

"That was my first reaction, but at the same time I was thinking is this even safe?"

"It was a disaster. It was a miracle no-one was killed," he added.

Sebastian Rejnisz, 44, who lives in the building, said: "I was moving my car out the back at the time when I heard a boom. I just thought it was the bins.

"I then went in and opened the front door and saw the roof was on the street.

"Everyone was just running around."

A large police cordon is in place and part of the metal roof has been left pushed up against the side of the building.

Housing provider Paradigm said it was "aware of an incident" affecting one of its properties, and that staff were "working with the emergency services and supporting residents".

Slough MP Tan Dhesi called it a "major incident" and asked people to "stay away".

Slough Borough Council said it had specialist officers on the scene and that there was heavy congestion in the area.

A spokesman for Royal Berkshire Fire and Rescue Service said three fire engines were at the scene and that it was not "not aware of anyone trapped" under the roof.

"The roof has come off in the wind. The current situation is trying to make the scene safe," he said.

He added that the fire service was not "100% sure" if anyone was still in the damaged building.

In a statement on Twitter, Thames Valley Police said officers did not believe anyone had been seriously injured and thanked those affected for their patience.

Holy Hell! Somebody actually LIVES in a neighborhood called Slough

Is that right next to Ischemia? And the town of Pustule?
Strong supporter of global warming as I have invested in speculative vineyard properties around Nome
Top

Is that right next to Ischemia? And the town of Pustule?

One of my favorite England town names was "Devizes." Pretty close to "Calne" if I recall. And then of course there's "Cheddar." Somewhere in that general vicinity is the hill giant. . . 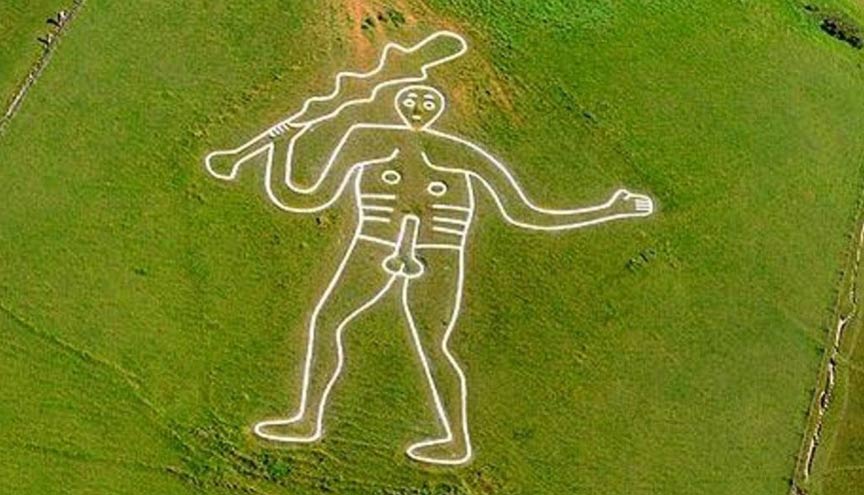 Now you know what spring is like in West Texas.
Texas, where we have the death penalty and aren't afraid to use it! Build the wall!!
Top

Weather must be bad w all those ppl wearing hoodies.
Top
Post Reply
10 posts • Page 1 of 1