This Is MAGA Country

This Is MAGA Country

/pol/ are rather skeptical (to say the least) about the truth behind this story. What do you think?


'This is MAGA country!': Black and gay Empire star Jussie Smollett is hospitalized in Chicago after 'premeditated' hate attack by two men in ski-masks who 'placed a noose around his neck and poured bleach on him'

The 35-year-old actor, who came out to Ellen in 2015 as gay, was attacked at 2am on Tuesday in Chicago by two men in ski masks

Sources close to the singer said that while both men wore ski masks, they were white and yelled that 'this is MAGA country'

Police are investigating case as a racially-charged battery and assault

Smollett lives in Chicago while the popular FOX show films

'Empire' star Jussie Smollett was violently attacked in an apparent homophobic and racist hate crime that left him hospitalized in Chicago.

The 35-year-old, who came out as gay to Ellen in 2015, was attacked at 2am on Tuesday in Chicago by two men in ski masks, ThatGrapeJuice.Net reports.

Reports of the incident state that Smollett was walking from a local Subway sandwich shop when the two men started yelling homophobic and racial slurs to get his attention.

The two then started beating on the actor while pouring bleach on him.

A noose was said to have been tied around his neck during the attack.

Sources close to the singer told TMZ that both of the men were white and yelled that 'this is MAGA country.'

Smollett was admitted to the Northwestern Memorial Hospital but has since been released. He suffered a fractured rib, during the attack, and is said to have put up a fight when he was beaten. 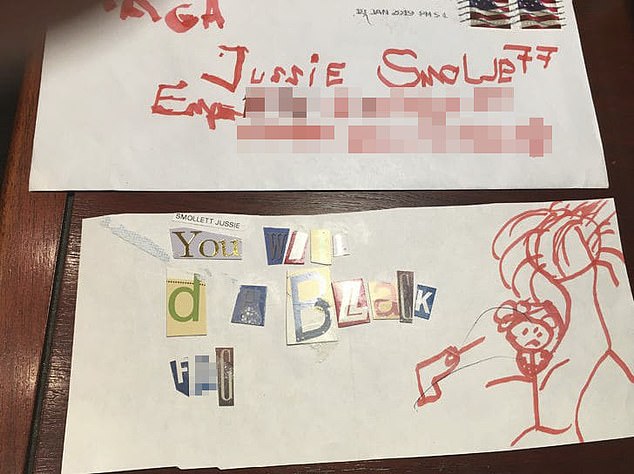 The attacks are believed to be premeditated as Smollett received a cut out letter, date stamped from January 18, stating that 'You will die black f*g.'

The Chicago Police Department are investigating the case as a racially-charged battery and assault. They are looking at nearby businesses for possible surveillance video.

Various celebrities and fans took to social media to lend their support for the actor and to call out racism and homophobia.

This is heartbreaking and terrifying...please pay attention to what’s happening here. Sending all my love to @JussieSmollett

Reverend Al Sharpton added: 'The reported hate attack on my friend and brother, actor Jussie Smollett is despicable and outrageous. The guilty must face the maximum.'

Smollett lives in Chicago while the popular FOX show films.

Empire follows the Lyon family as they try to maintain their dominance in the music industry. Taraji P Henson and Terrance Howard star as the main powerhouse couple in the series.

Smollett has played Jamal Lyon - an openly gay singer - for five seasons on the hit series.

Looks like that was written with the non-dominant hand. Let's see ..bleach...check...noose...check....racism...check...homophobia...check..perps can't be identified....check...linkage to Trump...check. All the boxes are checked. Sounds like faux hate crime to me.

Chicago is NOT MAGA country. Maybe Peoria.
Strong supporter of global warming as I have invested in speculative vineyard properties around Nome
Top

Here is the Chicago Tribune article related to this incident:

Chicago police said Tuesday they received a report of a “possible racially-charged assault and battery” involving an actor on the television show “Empire.”

Police say two people approached a 36-year-old man at about 2 a.m. Tuesday as he was walking in the 300 block of East Lower Water Street and got his attention by yelling racial and homophobic slurs. The man was hit and an unknown chemical substance was poured on him, according to police.

A rope was wrapped around the man’s neck before both suspects fled the scene, police said. The man took himself to Northwestern Memorial Hospital and is said to be in “good condition.”

Fox network representatives identified the man as Jussie Smollett, who plays gay musician Jamal Lyon on “Empire.” In a statement, the network said it is “deeply saddened and outraged.” “We will work with law enforcement to bring these perpetrators to justice. The entire studio, network and production stands united in the face of any despicable act of violence and hate — and especially against one of our own,” the statement read.

Representatives for Smollett, who has said he also identifies as gay, did not immediately return a Tribune request for comment.

“Given the severity of the allegations, we are taking this investigation very seriously and treating it as a possible hate crime. Detectives are currently working to gather video, identify potential witnesses and establish an investigative timeline,” CPD spokesman Anthony Guglielmi said in a statement.

“Empire,” which premiered on the Fox network in 2015, is a musical drama that films in Chicago for most of the year. The series stars Terrence Howard, Taraji P. Henson and Bryshere Gray.

“Empire” co-creator Danny Strong tweeted, “I’m deeply horrified and saddened by the racist and homophobic attacks against @JussieSmollett. He is a kind and profoundly talented soul whom I respect with all my heart. The terror of racism and homophobia has no place in our society, it is the most indecent way to live...whoever did this, do not forget that you are nothing but hate filled cowards while Jussie’s talent and activism will continue to shine a bright light on to the world for decades to come.”

GLAAD, an organization that monitors representation of lesbian, gay, bisexual and transgender people in the media, said in a statement that it had reached out to Fox and Smollett’s team “to offer assistance as well as support for him. Jussie is a true champion for LGBTQ people and is beloved by the community and allies around the world.”

Area Central Detectives are asking anyone with information to call (312) 747-8382 or report it anonymously to http://www.cpdtip.com.

It sounds a bit over the top....
----ski masks (Well, at 2am the temperature was about 7 degrees F https://www.wunderground.com/history/airport/KORD?hdf=1
----Claims the men were white. (how easy would that be to tell if its dark outside (2am) AND they are wearing ski masks which would presumably cover their faces)
---were carrying a rope and bleach. Sounds pretty unlikely unless they were either intentionally stalking this guy or thought they would be able to find a homosexual man walking the streets at 2am on one of the coldest nights of the year (thus far)
----throwing bleach----that sounds more like a London/British thing. I am not all that familiar with "bleach attacks" in the US

The 300 block of East Lower Water Street includes a self park parking lot. The Loews Apartment/Hotel building is a stone's throw away. The Consulate General of India and also of South Korea are within a block of this location. The NBC Tower (which houses the Chicago NBC tv affiliate) is also right down the street. I suspect that there is a good chance that a nearby business would have security cams which might have caught this incident.

Here is a link on Google maps to over 100 photos of the immediate area which would give you an idea of what it looks like:
https://www.google.com/maps/place/Ogden ... 87.6199344

As crappy as the Chicago PD is in solving homicides (as of the first 6 months @ 2018, their homicide clearance rate was only 15.4%; a drop from the 2017 figure of 17.1%), this is a high profile case and given that the victim is a celebrity (and gay), I presume they will pull out all the stops looking into this.

I would defer any judgement until the police conclude their investigation (since this would not be the first time such a 'hate crime' turned out to be fake).
The American Republic will endure until the day Congress discovers that it can bribe the public with the public’s money.
- misattributed to Alexis De Tocqueville

chijohnaok wrote:I would defer any judgement until the police conclude their investigation (since this would not be the first time such a 'hate crime' turned out to be fake).

Maybe Molly Ringwald should have heeded your advice.

Apparently the Chicago Police Department have released a statement saying that the MAGA comment did not happen and Smollett did not identify the race of his attackers.

https://reason.com/blog/2019/01/29/chic ... -jussie-sm
I could be the catalyst that sparks the revolution
I could be an inmate in a long-term institution
I could dream to wide extremes, I could do or die
I could yawn and be withdrawn and watch the world go by
What a waste...
Top

Most plausible I've heard is a liveleak post: "he got rolled buying drugs and came up w/ something"
This post is not a legal document under any circumstance. It has not been prepared at all and is written offhand in jest while mentally impaired.
Do not act or rely on any of this information without first seeking the advice of a psychoanalyst.
Top

well, here we go. Does this "narrative hyperbole" remind anyone of anything else?

Perhaps something that JUST happened last week and that required a lot of Twitter posting deletions by the idiots who fell for it?
Strong supporter of global warming as I have invested in speculative vineyard properties around Nome
Top

How about in Kansa nowadays?

A female Gov. and all that?

Well, with 375+ million peoples in the country (at least!) and humanity learning to adapt all its powers of duplicity and loathsomeness to the new Internet Global Commons, you never know till the Grand Jury has a chance to hear all the facts (so to speak) . . .

That said, does sound very suspicious . . .

Most plausible I've heard is a liveleak post: "he got rolled buying drugs and came up w/ something"

Anyway, who fucking cares honestly? You've got to be some kind of brain damaged numb skull to imagine that a single assault and battery has any bearing at all on the zeitgeist that is the rise of Trump and the MAGA ethos. I mean sure I sympathize with anyone who was innocently assaulted or subjected to slander or any other crime, but how does one go from that earnest empathy for a fellow human being to some kind of zealous ranting about the elected President of the country!? Its like a whole loud-mouthed segment of the planet are constantly high on ergot poisoning . . .
Anthro's NSFW Thread
Top

MSNBC decided to go one better and claim that the attackers were (allegedly) wearing MAGA hats...

Will they ever learn?

There have to be security videos.

Has anyone here ever heard of the guy before? Why would THIS guy be singled out?

The Bull-Shit-o-meter is in the red zone.
Strong supporter of global warming as I have invested in speculative vineyard properties around Nome
Top
Post Reply
432 posts