Who is paying Stormy Daniels's atty?

The loud mouthed attorney, who 6 months ago seemed to be everywhere, is now reduced to using a public defender to defend himself:

Serves him right.
The American Republic will endure until the day Congress discovers that it can bribe the public with the public’s money.
- misattributed to Alexis De Tocqueville

It is rare that karma returns to its purveyor so quickly, so decisively and with such potent edification. Truly a moment to savor . . .
Anthro's NSFW Thread
Top

Wow...I don't the word "karma" is quite enough.

His downfall is epically Shakespearean. *

His downfall is epically Shakespearean. *

Hmmm, the only thing with Shakespeare's tragedies is, all of them seem to be accessible protagonists who are both flawed, but likeable in their own way. Effectively they are, for most normal (i.e., not sociopathic nor psychopathic) individuals "relatable" by the viewer/reader.

I would say his downfall is more akin to Hitler's, though that is too grandiose . . . Maybe the fall of John Wayne Gacy?


Execution
On the morning of May 9, 1994, Gacy was transferred from the Menard Correctional Center to Stateville Correctional Center in Crest Hill to be executed. That afternoon, he was allowed a private picnic on the prison grounds with his family. For his last meal, Gacy ordered a bucket of Kentucky Fried Chicken, a dozen fried shrimp, french fries, fresh strawberries, and a Diet Coke.[313] That evening, he observed prayer with a Catholic priest before being escorted to the Stateville execution chamber to receive a lethal injection.[314]
Before the execution began, the chemicals used to perform the execution unexpectedly solidified, clogging the IV tube administering the chemicals into Gacy's arm and complicating the execution procedure. Blinds covering the window through which witnesses observed the execution were drawn, and the execution team replaced the clogged tube to complete the procedure. After ten minutes, the blinds were reopened and the execution resumed. The entire procedure took 18 minutes.[315] Anesthesiologists blamed the problem on the inexperience of prison officials who were conducting the execution, stating that had correct execution procedures been followed, the complications would never have occurred. This error apparently led to Illinois' subsequent adoption of an alternative method of lethal injection. On this subject, one of the prosecutors at Gacy's trial, William Kunkle, said: "He got a much easier death than any of his victims."[316]

According to published reports, Gacy was a diagnosed psychopath[317] who did not express any remorse for his crimes. His final statement to his lawyer before his execution was that killing him would not compensate for the loss of others, and that the state was murdering him.[316] His final spoken words were "Kiss my ass."[318]

In the hours leading up to Gacy's execution, a crowd estimated to number over 1,000[319] gathered outside the correctional center; the majority of whom were vocally in favor of the execution, although a number of anti-death penalty protesters were also present. Some of those in favor of the execution wore T-shirts hearkening to Gacy's previous community services as a clown and bearing satirical slogans such as "No tears for the clown".[320] The anti-death penalty protesters present observed a silent candlelight vigil.[321]

After Gacy's death was confirmed at 12:58 a.m. on May 10, 1994, his brain was removed. It is in the possession of Helen Morrison, a witness for the defense at Gacy's trial,[322] who has interviewed Gacy and other serial killers in an attempt to isolate common personality traits of violent sociopaths. His body was cremated after the execution.

In the months following Gacy's execution, many of his paintings were auctioned.[323] Some were bought so that they could be destroyed in a June 1994 communal bonfire held in Naperville, Illinois and attended by approximately 300 people, including family members of nine of Gacy's victims.[323]

Also, it is perhaps worth noting that the literal meaning of the term "karma" is a bit obscure . . .

Karma (/ˈkɑːrmə/; Sanskrit: कर्म, translit. karma, IPA: [ˈkɐɽmɐ] (About this soundlisten); Pali: kamma) means action, work or deed;[1] it also refers to the spiritual principle of cause and effect where intent and actions of an individual (cause) influence the future of that individual (effect).[2] Good intent and good deeds contribute to good karma and future happiness, while bad intent and bad deeds contribute to bad karma and future suffering.

... Embattled lawyer Michael Avenatti was the subject of a federal warrant Wednesday that resulted in the seizure of his private jet, worth about $4.5 million ...

... Embattled lawyer Michael Avenatti was the subject of a federal warrant Wednesday that resulted in the seizure of his private jet, worth about $4.5 million ...

Well, that certainly reduces the risk of him being a “flight” risk....hehehe
The American Republic will endure until the day Congress discovers that it can bribe the public with the public’s money.
- misattributed to Alexis De Tocqueville

So......here is a little insight into the guy that CNN & MSNBC deemed worthy enough to put on the air 108 times in 2 months:

(From Ace of Spades):

The honorary Permanent Expert Analyst of CNN and MSNBC has been taking other people's money for some time now.

Celebrity lawyer Michael Avenatti was slammed Thursday with a 36-count indictment by a federal grand jury in California that accuses him of ripping off clients -- including a mentally ill paraplegic -- tax crimes, wire fraud, bank fraud, and perjury.
The indictment comes more than two weeks after federal prosecutors in Los Angeles and New York hit Avenatti with separate criminal complaints.

In the New York federal case, Avenatti is accused of trying to extort more than $20 million from Nike by threatening to expose alleged bribery of amateur basketball players and their families unless the company coughed up cash to Avenatti and a client.

Celebrity lawyer Michael Avenatti was slammed Thursday with a 36-count indictment by a federal grand jury in California that accuses him of ripping off clients-- including a mentally ill paraplegic -- for millions of dollars, shorting the IRS of millions more, swiping millions of dollars in employment taxes from his coffee company, and perjury.

U.S. Attorney Nick Hanna of Los Angeles said that Avenatti's allegedly criminal conduct spanned four distinct areas, which "are all linked to one another because money generated from one set of crimes appears in other sets -- typically in the form of payments to lull victims and to prevent Mr. Avenatti's financial house of cards from collapsing."

An IRS official said that the money stolen by Avenatti though "a tangled financial web of lies" was "used to fund a lavish lifestyle which had no limits."

Here are the details on how he stole -- yes, straight up stole -- $4 million from his mentally-ill paraplegic client. 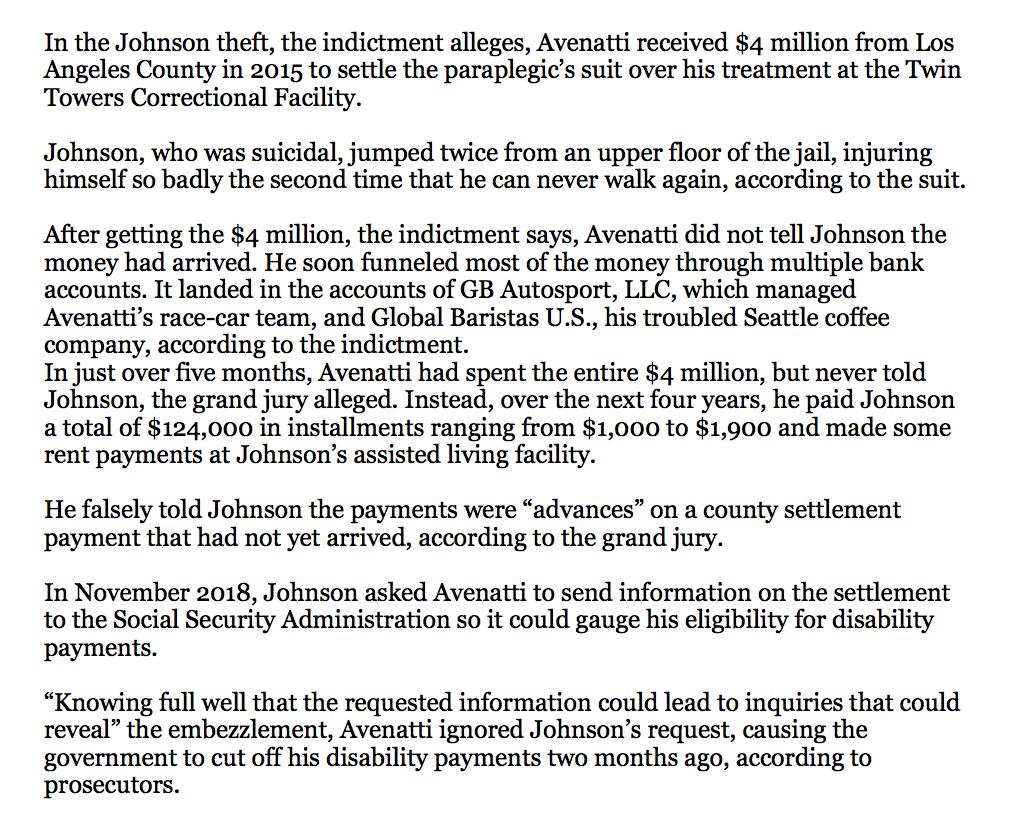 He never told his client that the money had been paid, and then, over a series of years, paid out to him a meager $124,000 or so, telling him these were merely "advances" on a settlement that had not yet been paid.

This is theft. This is grand larceny. 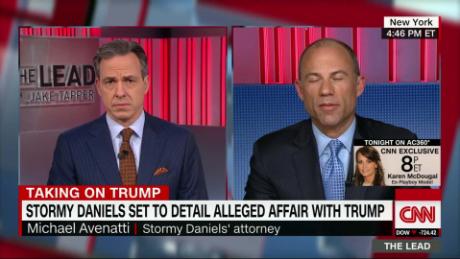 
Most of the money for the paraplegic client allegedly was funnelled to a company that managed Avenatti's race-car team, and to his coffee company, Global Baristas, which operated the Tully's chain.

He stole $4 million from his parapalegic client and let the client's disability payments from the federal government get cut off.

There should be a special place in hell for this guy.
The American Republic will endure until the day Congress discovers that it can bribe the public with the public’s money.
- misattributed to Alexis De Tocqueville

Wow.."slimeball lawyer" is hardly adequate. He cheated his law partner as well but that perhaps should not be a crime.

This guy attracted other slimeballs and opportunists like a magnet with iron filings.
Strong supporter of global warming as I have invested in speculative vineyard properties around Nome
Top
Post Reply
52 posts