Julián Castro Drops Out of Presidential Race
The American Republic will endure until the day Congress discovers that it can bribe the public with the public’s money.
- misattributed to Alexis De Tocqueville

I honestly couldn't care less if there are zero "Latino" or 100% Latino candidates. Ethnicity is not a proxy for merit. They can all be nearly identical homosexual Scandinavian genderqueer "immigrants" and I'd be perfectly fine with voting for whichever one actually has MERIT.
Anthro's NSFW Thread
Top


Maybe the youngster and his campaign workers are not as smart as they pretend to be.


Maybe the youngster and his campaign workers are not as smart as they pretend to be.

In order to qualify for the Iowa debate, a presidential hopeful must report 225,000 unique donors. Additionally, a candidate must either see at least five percent support in four qualifying national polls, or seven percent support in two DNC-approved early state polls.


Continued at https://www.breitbart.com/politics/2020 ... at-debate/
The American Republic will endure until the day Congress discovers that it can bribe the public with the public’s money.
- misattributed to Alexis De Tocqueville 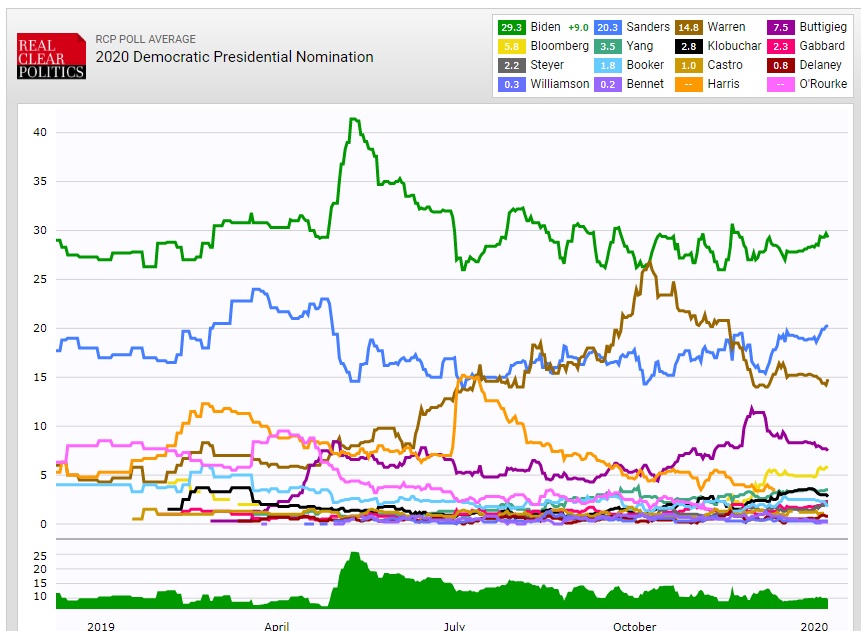 Not much is changing in the ratings ... hunter's antics don't seem to have impacted creepy joe's ratings any more than gettin impeached has impacted trumpfs ...

and buttleg bringin up the rear at 7%

looks like it will be trumpf versus creepy ..
Top

CNN throw Bernie under the bus...

The stakes were high when Bernie Sanders and Elizabeth Warren met at Warren's apartment in Washington, DC, one evening in December 2018. The longtime friends knew that they could soon be running against each other for president.

he two agreed that if they ultimately faced each other as presidential candidates, they should remain civil and avoid attacking one another, so as not to hurt the progressive movement. They also discussed how to best take on President Donald Trump, and Warren laid out two main reasons she believed she would be a strong candidate: She could make a robust argument about the economy and earn broad support from female voters.

Sanders responded that he did not believe a woman could win.

The description of that meeting is based on the accounts of four people: two people Warren spoke with directly soon after the encounter, and two people familiar with the meeting.

That evening, Sanders expressed frustration at what he saw as a growing focus among Democrats on identity politics, according to one of the people familiar with the conversation. Warren told Sanders she disagreed with his assessment that a woman could not win, three of the four sources said.

Sanders denied the characterization of the meeting in a statement to CNN.

"It is ludicrous to believe that at the same meeting where Elizabeth Warren told me she was going to run for president, I would tell her that a woman couldn't win," Sanders said. "It's sad that, three weeks before the Iowa caucus and a year after that private conversation, staff who weren't in the room are lying about what happened. What I did say that night was that Donald Trump is a sexist, a racist and a liar who would weaponize whatever he could. Do I believe a woman can win in 2020? Of course! After all, Hillary Clinton beat Donald Trump by 3 million votes in 2016."

These previously unreported details from the two senators' private meeting shed new light on the careful efforts that Warren and Sanders appear to have made to manage their friendship and political rivalry even before the 2020 race was officially underway. From the start, even as both candidates were determined to capture the Democratic nomination, they were also keenly sensitive to the risk that their rivalry could divide the progressive movement.

The conversation also illustrates the skepticism among not only American voters but also senior Democratic officials that the country is ready to elect a woman as president, several years after one clinched a major political party's nomination for president for the first time. Many Democrats believe sexism played a role in Hillary Clinton's defeat in the 2016 general election, and voters say they are torn about whether to try again to put a woman in the White House in 2020.

The revelation that Sanders expressed skepticism that Warren could win the presidency because she is a woman is particularly noteworthy now, given that Warren is the lone female candidate at the top of the Democratic field. And notably, their meeting in December 2018 came just weeks after a record number of women had been elected to the House of Representatives, helping to deliver the majority to the Democrats.

Democrats have been intensely debating questions of identity and representation in recent years, and the party's historically diverse field of White House candidates this cycle has featured multiple women.
Sanders himself weighed in shortly after the 2016 election, saying that "one of the struggles that you're going to be seeing in the Democratic Party is whether we go beyond identity politics."

"I think it's a step forward in America if you have an African American CEO of some major corporation. But you know what, if that guy is going to be shipping jobs out of this country, and exploiting his workers, it doesn't mean a whole hell of a lot whether he's black or white or Latino," he said at an appearance in Boston to promote his book, according to WBUR.

Warren has grown increasingly vocal over the past few months on the role of sexism and gender inequality in politics, including experiences the Massachusetts Democrat said she has endured in the years that she has been in public office.

On the campaign trail, Warren tells voters the story of how some male colleagues have advised her to "smile more" and being discouraged from running for Senate in 2012 because she was a woman.

"Over and over, we are told that women are not allowed to be angry. It makes us unattractive to powerful men who want us to be quiet," Warren wrote in a campaign email in November, with the subject line: "I am angry and I own it."

Three weeks ahead of the Iowa caucuses, Warren is now the only woman polling in the double-digits nationally. A new CNN/Des Moines Register/Mediacom poll showed Warren in a four-way race in Iowa, along with Sanders, former South Bend, Indiana, Mayor Pete Buttigieg and former Vice President Joe Biden. In that survey, Sanders and Warren performed nearly equally well as the top choice among female likely Democratic caucusgoers, while Sanders and Buttigieg were the top choice among men.

Last month, Warren said in Las Vegas that she had "lived enough of my life with men, and it's mostly been men, telling me to sit down and be quiet." Days later, she acknowledged that this was a dynamic she had experienced in the current campaign.

Warren's rivals have also grappled with the issue of sexism in politics. Biden recently said on the campaign trail that Clinton had confronted "unfair" sexist attacks in the last election, and added: "That's not going to happen with me."

Sen. Amy Klobuchar said recently that female candidates with as little political experience as Buttigieg would not have qualified for the presidential debate. "Women are held to a higher standard," the Minnesota Democrat said. "Otherwise we could play a game called 'Name Your Favorite Woman President,' which we can't do because it has all been men."

The New York Times first reported over a year ago that Warren and Sanders met in Washington in December 2018. That initial report said that neither senator sought each other's support, and that they did not try to dissuade one another from running in the 2020 election.

If Warren and Sanders agreed on a non-aggression pact of sorts that night, that agreement has become increasingly frayed.

Over the last year, Sanders aides and advisers have taken to social media to criticize Warren on numerous issues, including "Medicare for All," student loan debt cancelation and the "wealth tax." Some of his allies have also implicitly and explicitly gone after Warren on the broader question of who has the rightful claim to the progressive mantle in 2020.

"People have to decide do they want originals or do they want copies," Nina Turner, Sanders' campaign co-chair, told CNN over the summer. "He's the original."

Politico reported over the weekend on the Sanders campaign's talking points instructing volunteers to say that Warren's supporters are "highly-educated, more affluent people who are going to show up and vote Democratic no matter what" and that "she's bringing no new bases into the Democratic Party."

Campaigning in Marshalltown, Iowa, Warren told reporters that she was "disappointed to hear that Bernie is sending his volunteers out to trash me."

"Bernie knows me, and has known me for a long time," Warren said. "He knows who I am, where I come from, what I have worked on and fought for, and the coalition and grassroots movement we're trying to build."

Sanders himself appeared to distance himself from the memo, saying on Sunday that his campaign has "hundreds of employees" and that "people sometimes say things that they shouldn't."

"I have never said a negative word about Elizabeth Warren, who is a friend of mine," Sanders said.

NTTs squabbling over the scraps . . .

... Booker out of race for Democratic nomination ...