... The only thing here is that I hope you used Lapua ammo...

Goal: Taking dog out, check area around coop for predators.


Environment: Full solid rain is process and had been for several hours. Lots of "boom, boom" along with it. We've burned most of our pasture so strategically, rain is good, though we have been in "mud city" for months and this rain will not bring that to an end

Equipment: Initially, patrol with radius attached. I did not expect to see anything, hence that's all I brought. I immediately detected two critters I suspected as opossum in the Southern corner of the alfalfa patch closing the distance to the coop. I went and got RRS, rem700 7.62(22) AX and put three rounds of the new berger 155s in my pocket. 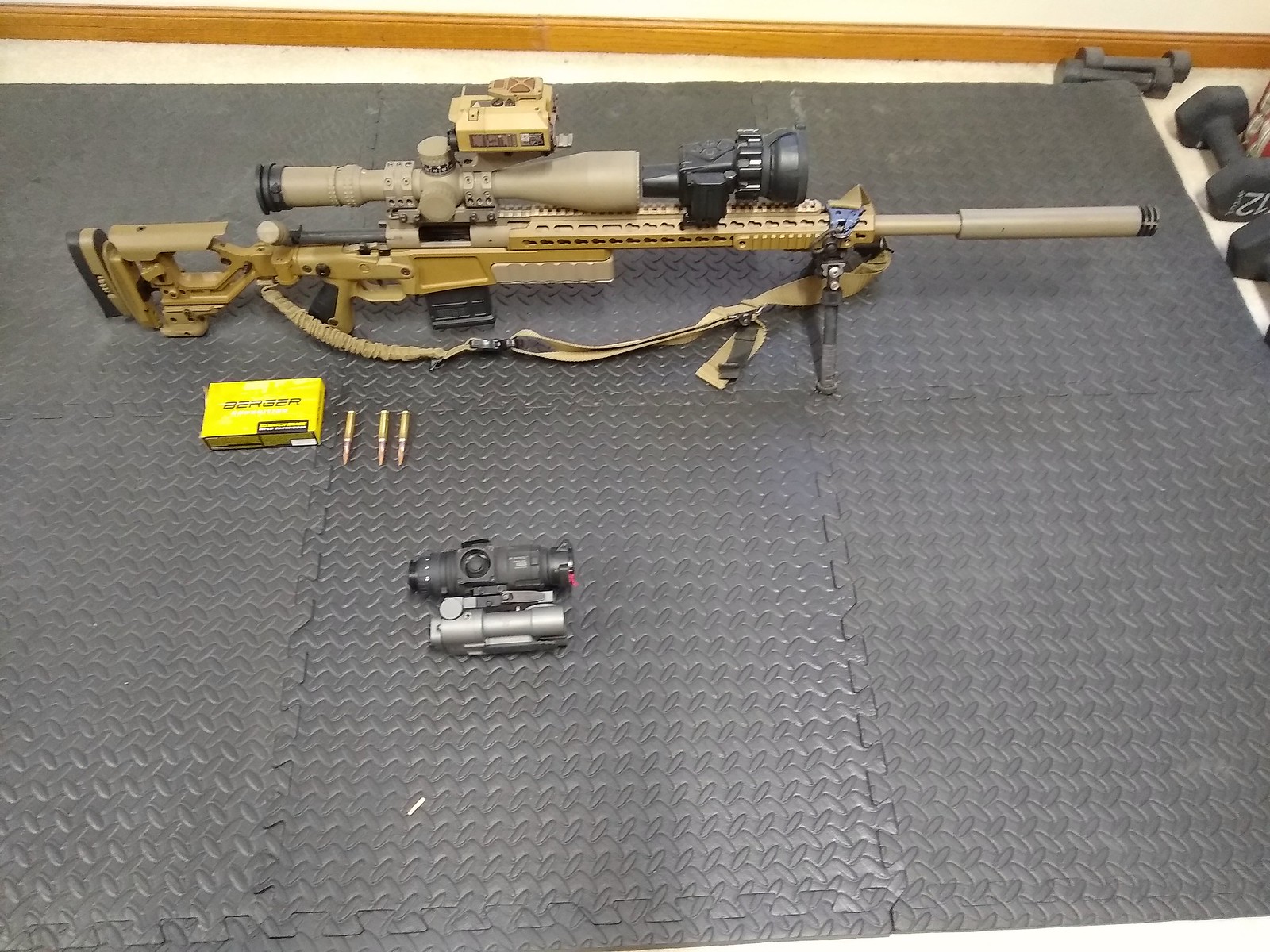 Activity: Setup and used the patrol to relocate the critters. They were still out there. The more distant one I ranged as 227yds. I was then able to find it with the NF 7-35x behind the UTCx off the tripod and fire one shot and it went down legs up in the air kicking. It did not move again. Looking around for the other one, I could not see it for a minute or so, but then it appeared from the East, heading West on the same path it was on before. It was moving at a pretty good clip, but there were lots of tree and branches in the way, so I trapped out to a clear spot on its path and waited. When it got there I "fired" but the safety was on ... so I had to trap out to the next clear spot and wait. This time I fired, but the critter accelerated quickly and ran into the apple orchard area and hid behind a tree. I continued to watch as I could only see about an inch of it.

After what seemed like a long while, it came out from behind the tree and headed straight for me and the coop. I trapped ahead again and fired and it went down feet up wiggling.

Got this pic this morning. 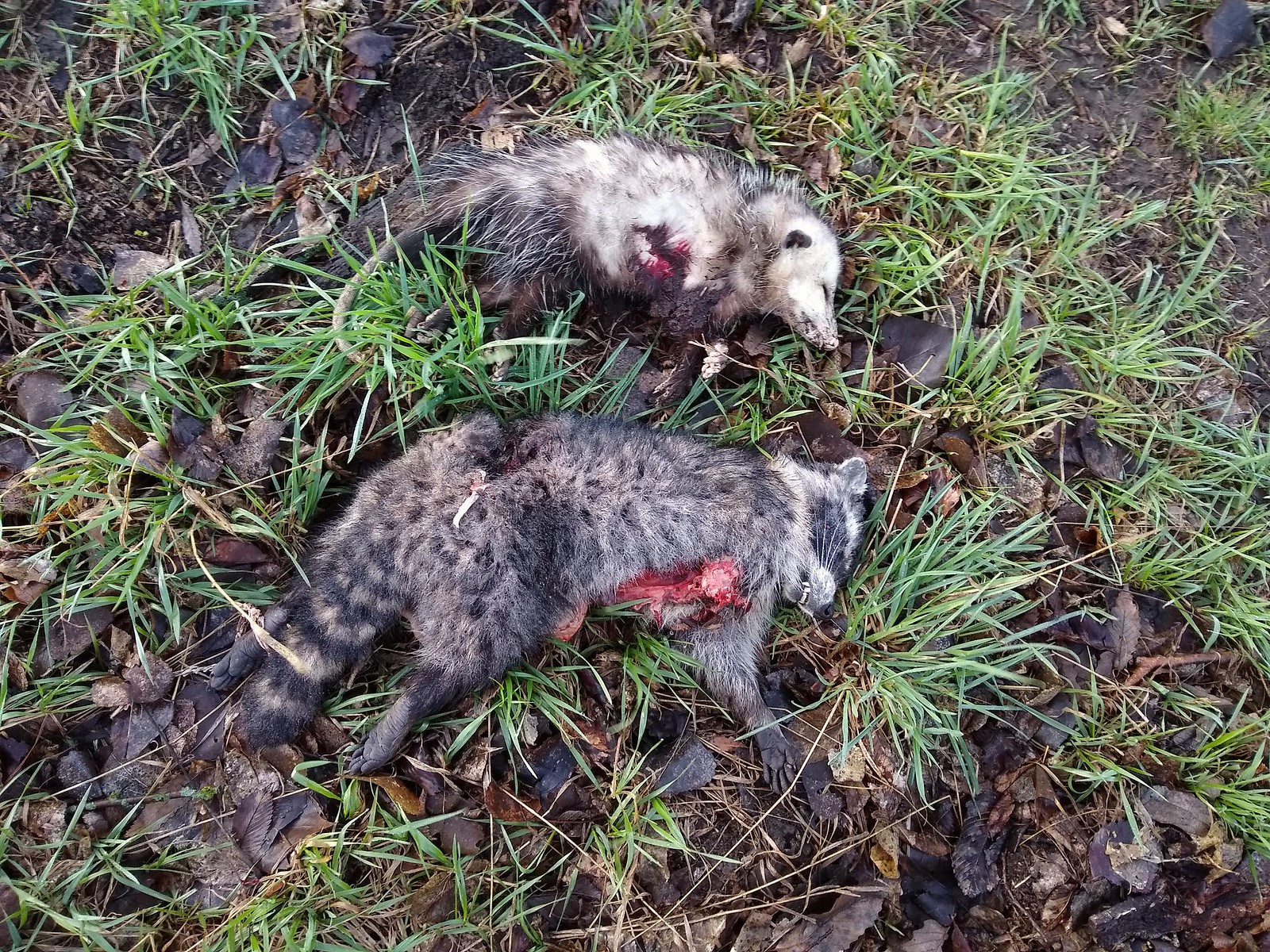 ). So that had to be the second shot. Yet the first one, high on rear back looks like it ought to have parallized the rear end at least. And I did not detect such.

Summary/Results: So, in general, if I see multiple targets, I will go after the tougher one to hit first, hoping that improves chance of a double. So, I was looking at the farther one when I decided they were opossum, based on movement. They seemed to be out together as they were on parallel track not too far apart, but that idea turned out to be wrong.

These two berger cartridges are GREAT for long distance ... stomping the 175gr on all external ballistics measures, but they are LONG COAL, so currently require single loading. Pull round from pocket, place on top of mag. Slide forward until you can press down. Then press down and back. The round is now in the top of the mag with the tip of the bullet on the feedramp. Lock the bolt home and fire. I've got about 60rds under my belt this weekend and while it is certainly slower than having mutliple rounds in the magazine, it did not inhibit getting the desired outcome tonight.
Ugum Bugum Uber Alles - Iddi Ut Amine Dada !!
Top 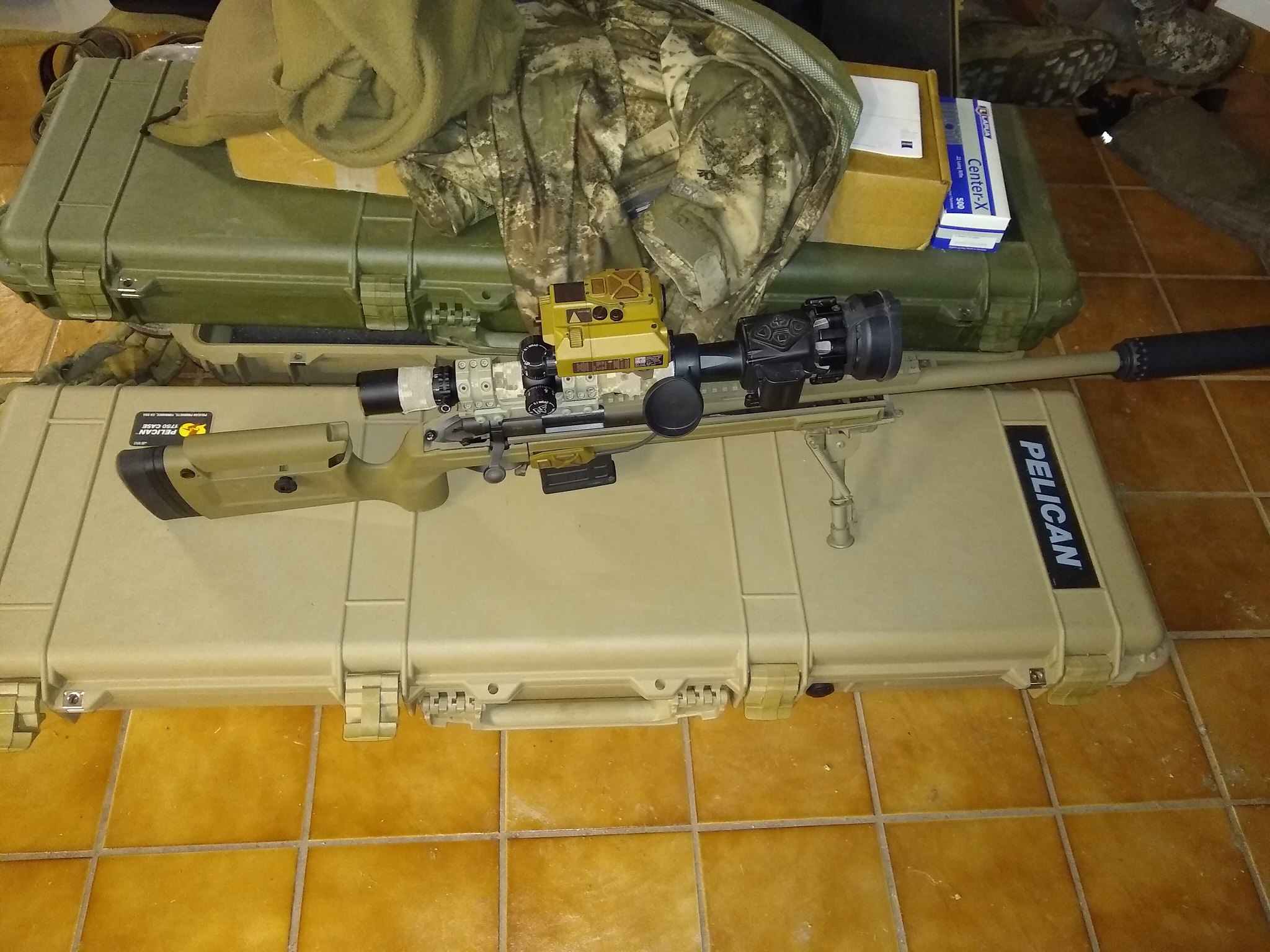 Activity: Went out with the patrol for a quick check. Made 3 x 360s ... testing various magnifications, digital focus, contrast increase, brightness reduction ... with the wind we do have some washout. On the third 360 saw a black blob back in the woods. Watched it and it moved ... it was alive .. I called it a probable coon. Went in the house got the gun, mag and tripod. Went out into front yard (probable Coon was in back). After loading (and making the loading noises) moved to normal 360 position in the "drive way" and setup. Critter was in same area. Ranged with RAPTAR and got 110yds. Lots of trees and branches as well as weed stalks ("weeds" around here can be over your head and have stalks thicker than your fingers that you cannot cut with a serraded knife blade). Lots of things I couldn't even see to defect a bullet. So watched and improved PID to yes, it was a Coon ... and a fairly large one and it was closing distance to the coop. I trapped out to a spot that looked a little clearer and waited. Once the head came out from behind a tree I fired. It went down feet up and wiggling. I reloaded. The feet wiggled for a long time, but the coon never rose again. After maybe 1 minute it stopped moving. When I first setup, I went to 2.5x on the scope to make sure I could find it. And I fired on 2.5x but when I was watching it wiggle, I zoomed in as the less it wiggled the harder it was to see, must have been down behind a rise in the ground. After it stopped, I jumped on the 4-wheeler and rolled out to find it. It was a two hander ... and much browner than any I've seen around here before. The hit was rear of skull, so about as clean as it gets. Critters jiggle a lot with head shots, that seems to be a pattern. 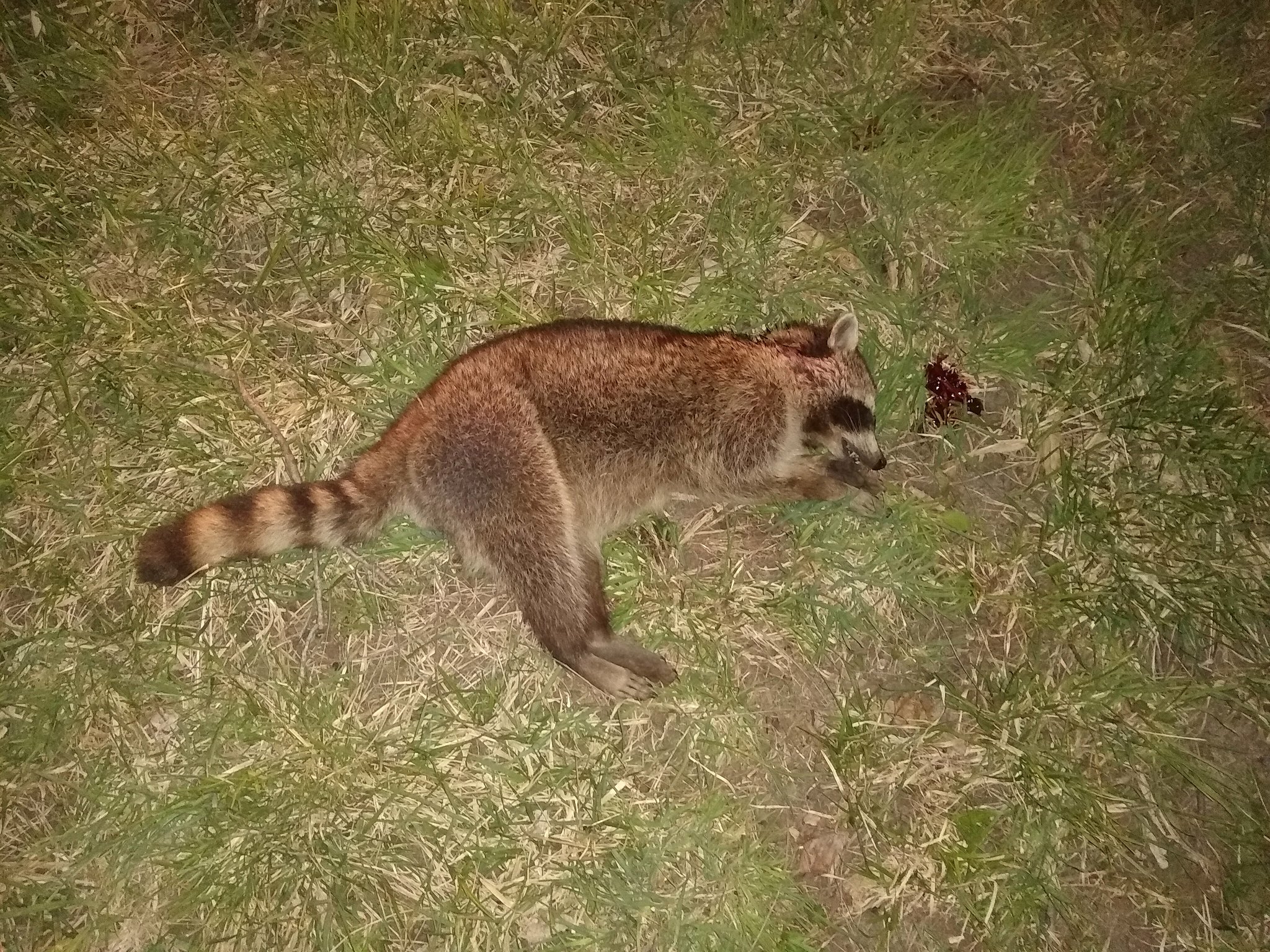 Summary/Results: This is the first kill for the new primary night rifle. The new scope works great in this role, it is about perfect. Of course, I still expect it to provide same performance as other scopes with dots at 100yds and steel out to 900yds. But, it is optimized for the night overwatch role.
Ugum Bugum Uber Alles - Iddi Ut Amine Dada !!
Top 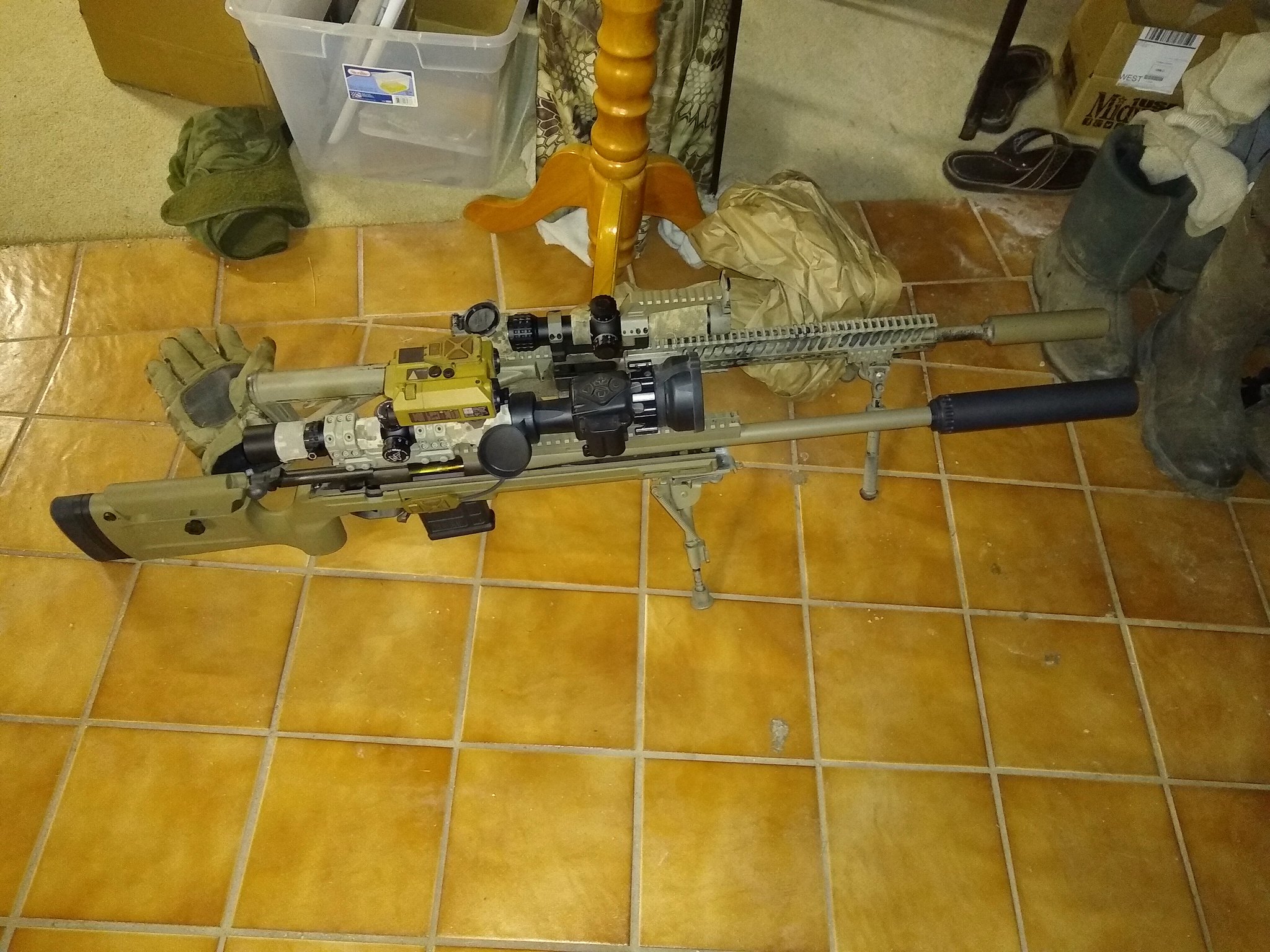 Activity: I'll make this short. We have some new fowl in the barnyard and they didn't go back where they were supposed to, so I encouraged them to go inside the electric fence around the chicken coop. That wasn't real secure, but better than nothing.
Then took IR-Patrol and went on foot patrol around the 5 acre human area. Saw critter in West pasture either opossum or coon, closing distance to coop. Went and got night rifle and tripod and moved into some shadows on some higher ground. On 2.5x spotted the critter, PID as coon 141 yds. First shot, coon went belly up legs flailing the air. But then got up and moved, stopped at 162 yds, second shot, coon belly up flailing. Was tired of the game, fired third shot coon stopped moving.
Got patrol and went and got coon and and disposed. Recovered equipment back to house. Just as I was wrapping up a big orange moon started rising. 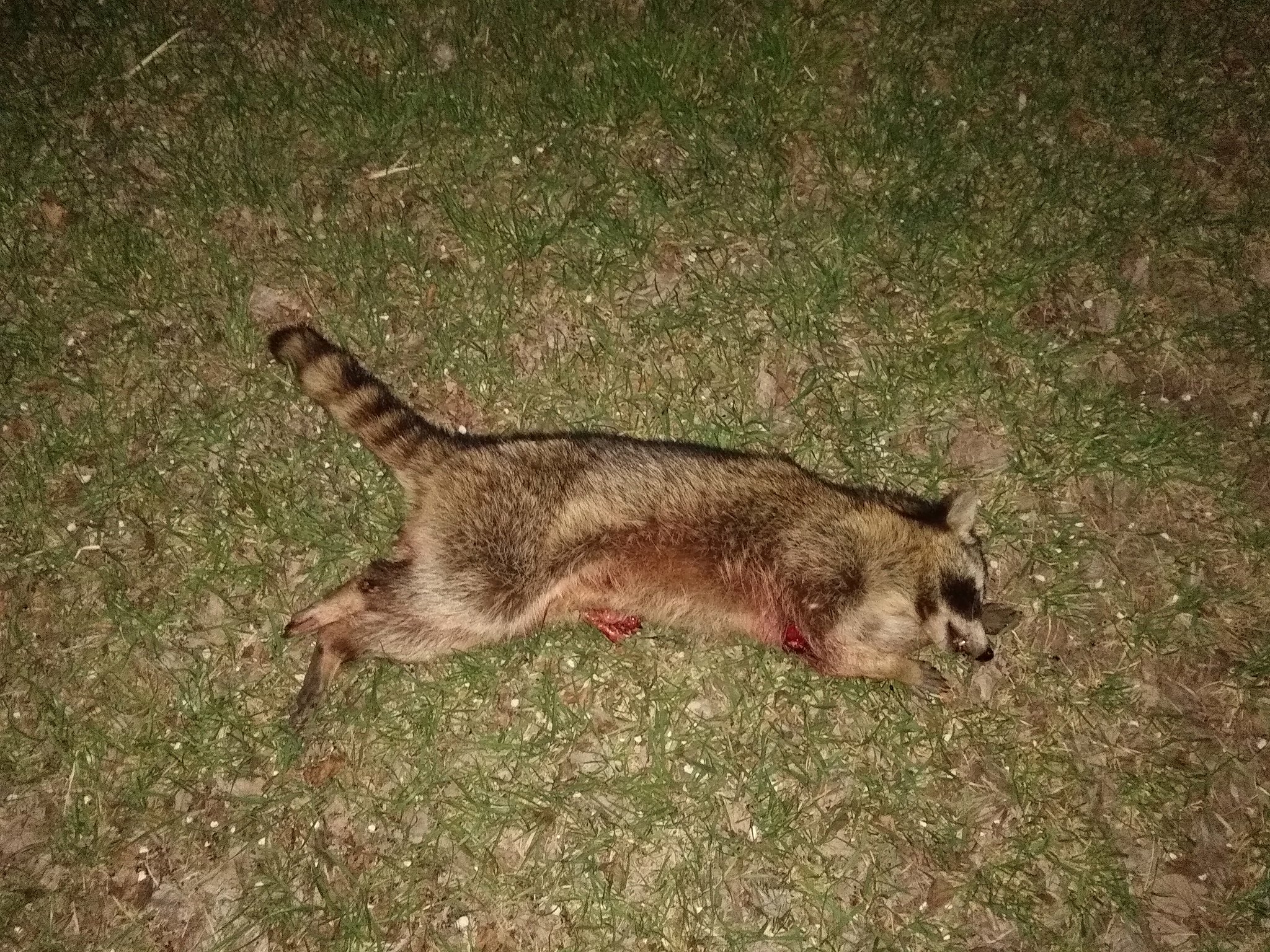 Results/Summary: Going forward, I will fire until they stop moving. No more ammo conservation. This scope is great for night work. I've been mostly using the 7.62(22) with the NF 7-35x T3 since October for the night activities and the 7x on the bottom is too much. I got used to it, but the 2.5x is absolutely great !!
Ugum Bugum Uber Alles - Iddi Ut Amine Dada !!
Top

Environment: Warm, tee shirt weather ... still no too buddy, some stars, no moon. 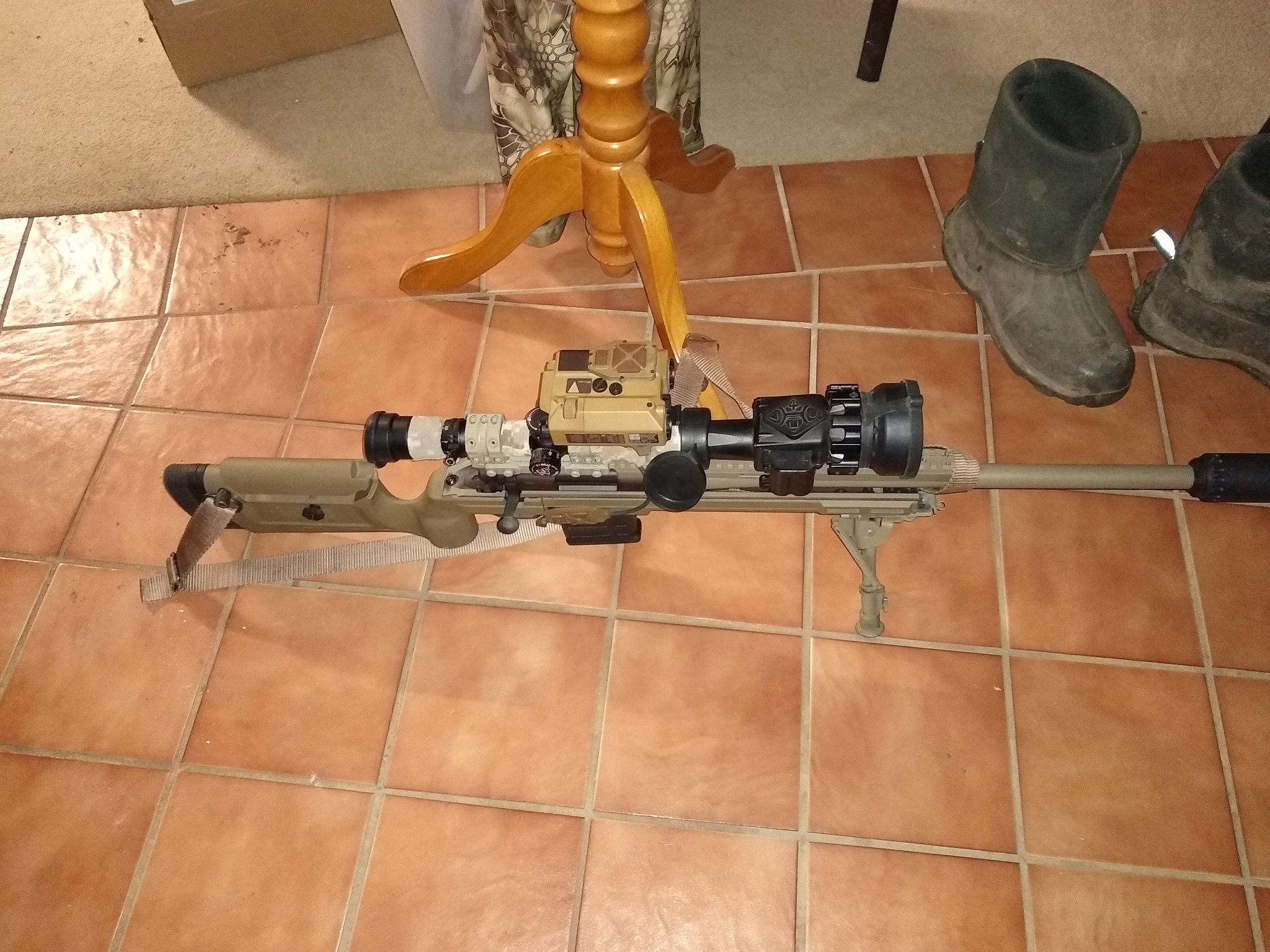 Activity: Setup in usual position and started 360s. Crank brightness down to 50%, leave gain at 5. Focus for 150yds on treeline to the West. Range mineral feeder at 419yds. Cows visible in the alfafa patch. I let them back in because we are putting them thru the chute this weekend and moving the pregnant females over to summer in our other pasture. Continue 360s, eventually I see movement in the woods to the NE. I crank up to 10x and confirm opossum or Coon. It is hard to see as there is so much vegetation. Times I can't see it , times I can see peices of it. I trap forward and wait for it to arrive. It arrives and I fire and I do not see it any more. But I did not see it run away. So I jump on the 4-wheeler and head out across the foot bridge (yes our foot bridge can take the 4-wheeler, but not the buggy). Got the pic. The other side had a 2 inch round hole centered in it, we got some fragmentation this time. 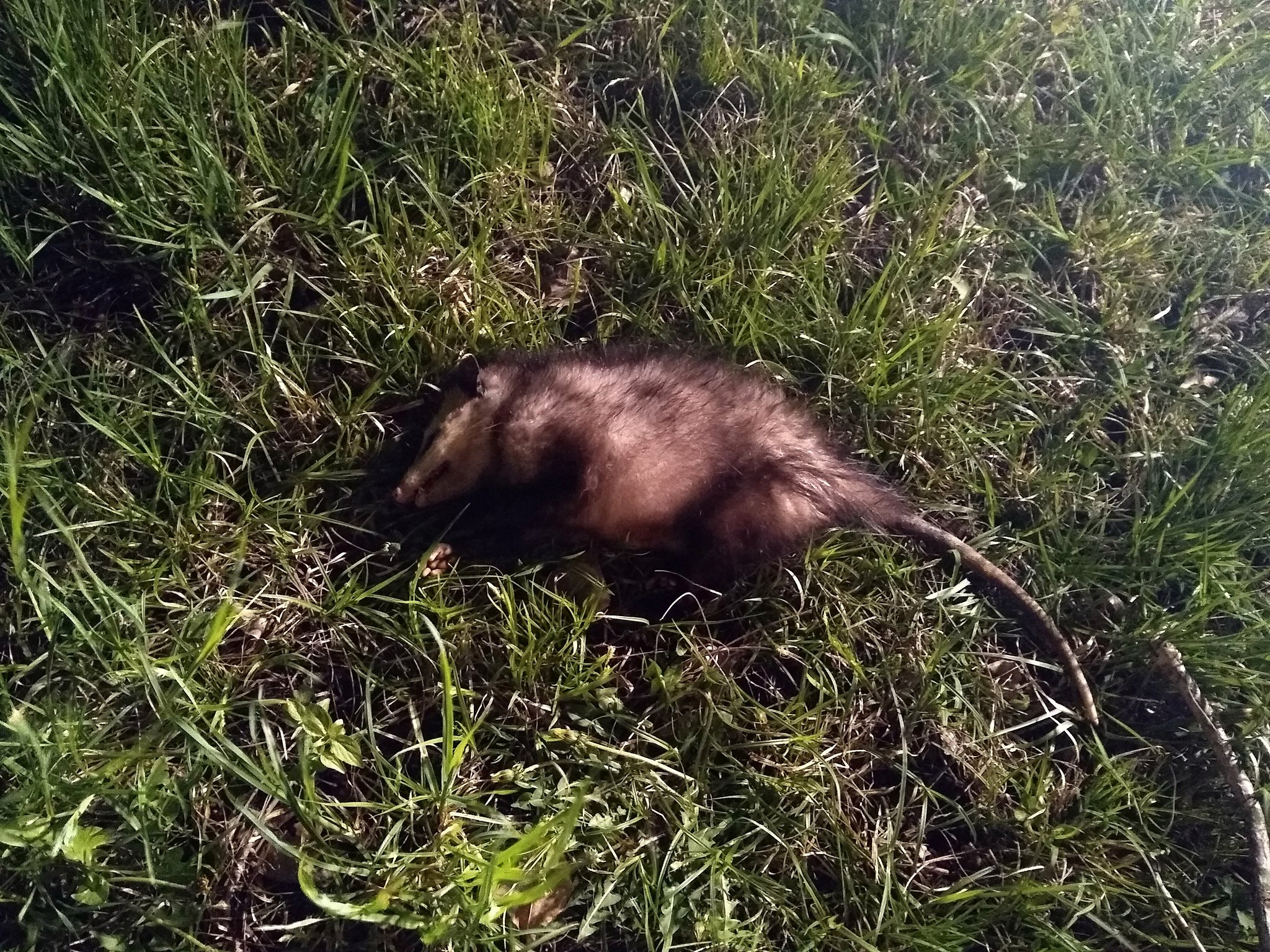 Results/Summary: During the day I confirmed zero and set the zero stop. So if there is any dialing and can instantly return to zero. I couldn't range the critter in all that vegetation but based on a nearby kmow distance fence post which is 114yds, I would estimate about that, maybe 1 yard further. Distance to the coup was 20yds closer.
Ugum Bugum Uber Alles - Iddi Ut Amine Dada !!
Top

Hoo Lee Shyah Tollah ... who is bold enough to think they could do this !!??


... A Nebraska farmer made a life-saving decision last month when he used a three-inch pocket knife to sever his own left leg that got caught in farming machinery.

Kurt Kaser, 63, says he was unloading corn from one bin to another on April 19 when he accidentally stepped into a grain auger, trapping his left leg in between the rotating shaft.

The equipment began to pull Kaser’s leg in further, mangling it.

“I didn’t know what to do,” he told the Omaha World-Herald on Tuesday. “I was afraid it was going to suck me in more. I about gave up and let it do what it was going to do.”

Kurt Kaser, 63, says he was unloading corn from one bin to another on April 19 when he accidentally stepped into a grain auger, trapping his left leg in between the rotating shaft.

The lifelong farmer told the paper that he couldn't find his cellphone and that it would be useless to yell for help on the 1,500-acre farm.

Kaser said his will to live kicked in when he saw the machine had already removed his foot. He observed an area just eight inches below his knee, took out his pocket knife and began to free himself.

"When I was cutting it, the nerve endings, I could feel, like, the ping every time I sawed around that pipe, and all at once it went and it let me go and I got the heck out of there," Kaser told Omaha's KETV-TV.

After he was freed, he crawled 150-200 feet to the nearest phone and was flown to a hospital. Kaser says he never lost consciousness.

He was released from a rehabilitation center over the weekend and will have to wait until his leg fully heals before he is fitted for a prosthetic.

“Some (other patients) won’t ever get out of their wheelchairs. What they’ve got is what they are. I know I will be walking again fairly normally. Other people can’t, won’t ever.” ... 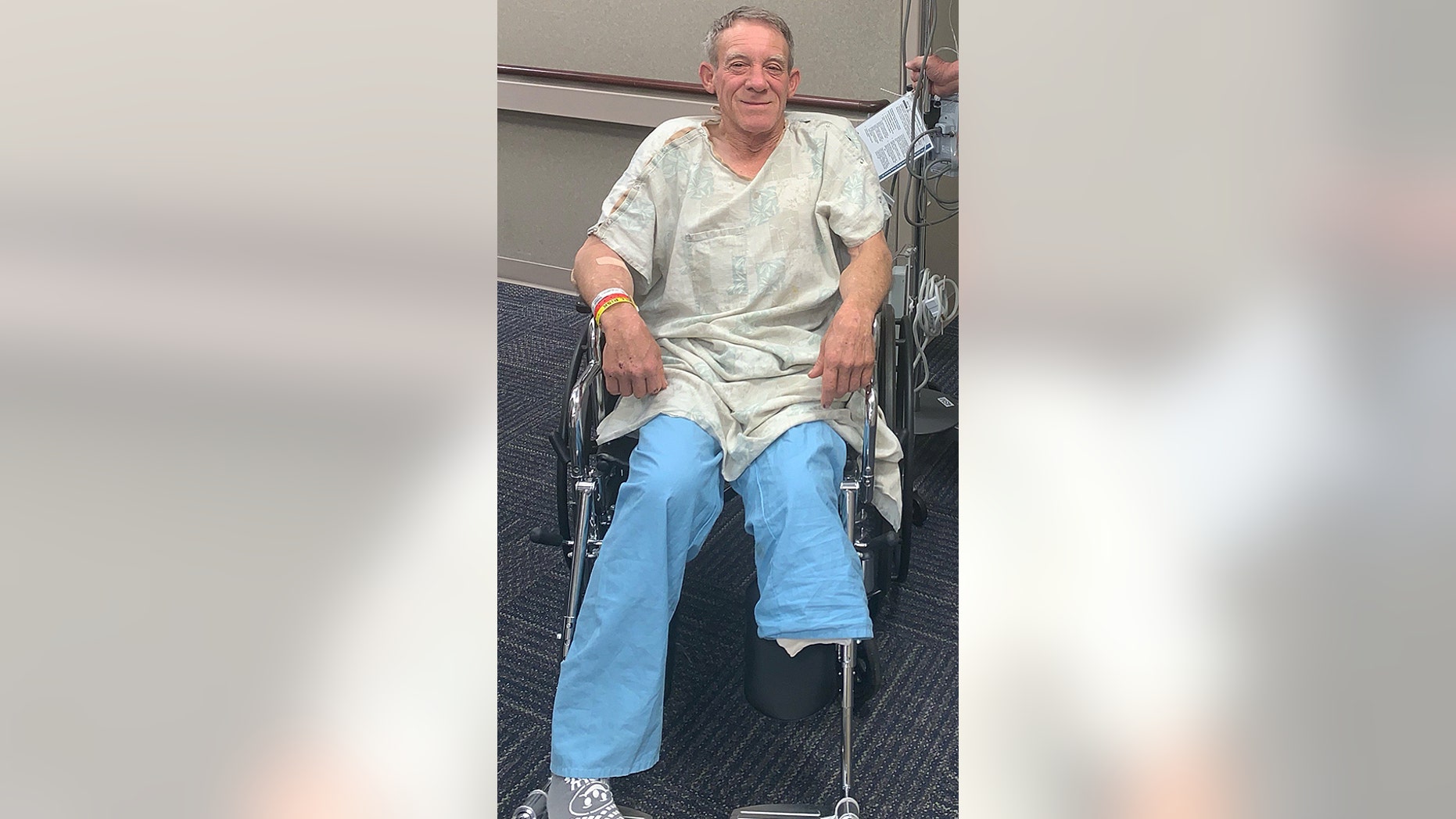 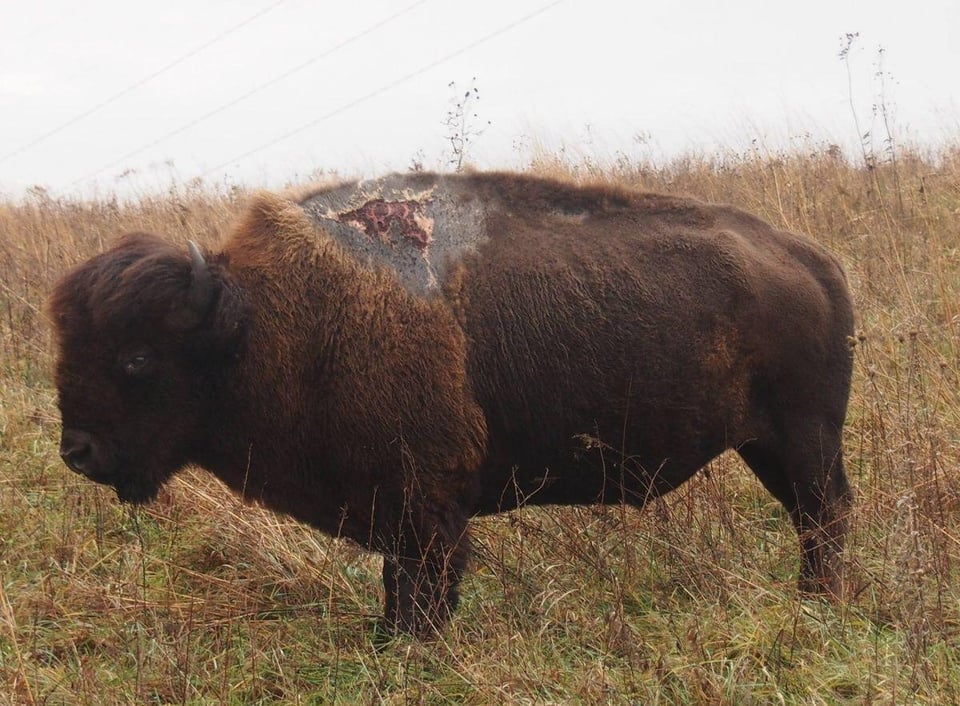 That had to have hurt.
"Fuck the king." - Sandor Clegane
"And the story was whatever was the song what it was." - Dire Straits
'Our father, which art in heaven..' "May he fucking stay there." - Al Swearengen, Deadwood
Top