... Rabbi Druckman: 'Parties that said they were in favor of separating religion and state either didn't make it or received very few seats.' ...

Is the principle of separation of church and state a solid universal principle, central to Western Civilization and the advancement of humanity toward galactic transcendance?
Yes.
Is Israel, LITERALLY a breach of this principle?
Yes, and it always has been, and is likely to continue to be for decades or even centuries.

Point is: when "your people" have been the target of centuries of genocidal intent, and at least one very recent and very destructive episode of state-sponsored genocide, the rules are legitimately "bent" for the sake of "your people."

Which I short-handed as "stopped being a religious state" . . .

In sum: I agree "religious states are repugnant and contrary to solid secular humanist ethics." But Israel deserves the exception.

There are possible one or two other ethnic/religious entities on Earth which similarly deserve such an exception (Tibet, maybe?, Coptics in the Islamic world?), but DEFINITELY not any of the major Christian sects nor ANY Islamic ones.
Anthro's NSFW Thread
Top

According to The Wall Street Journal, the New York Police Department (NYPD) has recorded a truly harrowing and eye-popping increase in city-wide hate crimes over the past year. Specifically, NYPD statistics reveal that hate crimes have increased by a whopping 83% — and the City Council's speaker minced no words in lamenting the epidemic presently afflicting the city with the nation's largest Jewish population as "an anti-Semitism crisis."

The New York Police Department had 176 complaints of hate crimes from Jan. 1 to May 19, the most recent date for which the data is available, according to figures provided to The Wall Street Journal. That is an 83% increase in hate-crime complaints across all categories, compared with the same period in 2018.

"Our residents should feel free to worship without fear–and yet they can’t right now," [City Council Speaker Corey Johnson] said. "We have an anti-Semitism crisis in New York. It’s a national problem, but New York accounts for way too many incidents." ...

Experts disagree on the reasons behind the rise in crimes, but NYPD Chief of Detectives Dermot Shea said at a news conference earlier this month that many individuals arrested for hate crimes have previously committed similar acts. ...

"Things are out of control," said former State Assemblyman Dov Hikind of Brooklyn, who is founder of the group Americans Against Antisemitism. "All the resources in the world should be allocated to this purpose."

The Daily Wire has reported before on the shocking rise in anti-Semitic incidents in New York City over the past couple of years. Curiously, however, much of the news surrounding the tragic rise has gone unreported by the mainstream press. Last November, Daily Wire Editor-in-Chief Ben Shapiro explained why that might be the case:

Jews don’t fit the intersectional classification necessary in order to receive narrative attention from either the mainstream media or from progressive groups. Orthodox Jews, who are often the targets of anti-Semitic attacks, aren’t seen as victims; their victimizers, who aren’t conservatives and who can’t be linked with conservatives, aren’t seen as victimizers. There’s a reason Al Sharpton, who helped initiate a riot against Orthodox Jews in Crown Heights in 1991, has a show on MSNBC where he opines about President Trump’s linkages to white supremacist anti-Semitism. Certain types of anti-Semitism are worthy of note. Others aren’t. And those on the Left often decide which is which with simple reference to a preferred narrative in which Jews are part of the white privileged class, unless they are victimized by white supremacists.


New York University, which is the largest private university in New York City, has also seen appalling incidents of unhinged anti-Semitism, of late. Perhaps even worse, the international edition of The New York Times, the city's most famous and iconic newspaper, engaged last month in open and transparent anti-Semitism. The Daily Wire reported on the Third Reich-reminiscent cartoon and the Times' initial non-apology, at the time:

The Times faced increased backlash after their non-apology and was forced to issue a new statement claiming the paper was "deeply sorry" after a white nationalist terrorist opened fire at a synagogue in California on Saturday, killing one and injuring three others.

"We are deeply sorry for the publication of an anti-Semitic political cartoon last Thursday in the print edition of The New York Times that circulates outside of the United States, and we are committed to making sure nothing like this happens again," The Times said in a new statement. "Such imagery is always dangerous, and at a time when anti-Semitism is on the rise worldwide, it’s all the more unacceptable."

All those redneck Klan and Nazi members in New York City are rearing their ugly heads again...

I wonder what sort of labels they are thinking about?
I mean Europe does have some history of that... 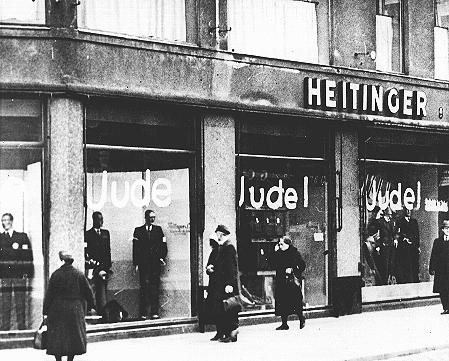 I wonder what sort of labels they are thinking about?
I mean Europe does have some history of that...

I think that there is boycott on the products from the occupied areas.

Unfucking believable. Its like Euro's just cannot help themselves.

We need to put warning labels on anything that was at any point in its commercial life cycle produced/packaged/sourced/processed or handled anywhere in the EU, China or any of the other "anti-American" parts of the globe . . .
Anthro's NSFW Thread
Top

Let's require a label for "Palestine"....a country which does not exist.
The American Republic will endure until the day Congress discovers that it can bribe the public with the public’s money.
- misattributed to Alexis De Tocqueville

Let's require a label for "Palestine"....a country which does not exist.

In Europe GMO foods needs labels. And everything needs the country of origin.

Let's require a label for "Palestine"....a country which does not exist.

I did not catch that part, which makes it slightly less egregious . . .
Anthro's NSFW Thread
Top

Blowing up hebbes is a tough business .. need more cargo !!

The Lebanese Al Akhbar newspaper on Tuesday morning quoted a Hamas source who claimed that the terror groups have sent a clear message saying that if Israel does not implement the understandings, they will begin escalating the situation.

According to the paper, the understandings Israel must implement include allowing the Qatari money into Gaza each month and increasing the electricity it supplies to Gaza by the end of this week.

Qatari envoy Mohammed al-Emadi is expected to arrive in Gaza via Israel on Thursday, bringing Gaza's monthly "stipend" with him, in cash. The funds are intended for poor people in Gaza. Al-Emadi will also bring diesel fuel for use in operating Gaza's only power plant.

Israel has already allowed two installments of $15 million in Qatari money into Gaza. The funds were supposed to have been distributed in six installments, but Israel postponed the third following the shooting of an IDF soldier by a terrorist from Gaza.

Earlier this year, Hamas agreed to end rocket fire, incendiary and explosive balloons, and the weekly border riots, in exchange for Israel allowing $25 million in Qatari money to reach Hamas, easing economic sanctions, including imports of goods that can be used for manufacturing weapons and and expanding the fishing zone around Gaza.

Israel began implementing the deal, despite the continuation of the balloon terror and weekly border riots.

However, rocket fire from Gaza has continued, as have the violent weekly border riots and the sending of explosive and incendiary balloons into Israeli territory.