She was undone by the Engarish language and PC bots.
Strong supporter of global warming as I have invested in speculative vineyard properties around Nome
Top

The gravy looks good. I would share some faggots with her any day.
Strong supporter of global warming as I have invested in speculative vineyard properties around Nome
Top

So if a word has one meaning for many years and then it suddenly becomes associated with something else, then that word (in ANY context) is forbidden.

I wonder if Google had also removed advertising for the Pepe’s Mexican restaurant chain?:

After all, hasn’t Pepe (the frog) supposedly become a symbol for white supremacists?
The American Republic will endure until the day Congress discovers that it can bribe the public with the public’s money.
- misattributed to Alexis De Tocqueville 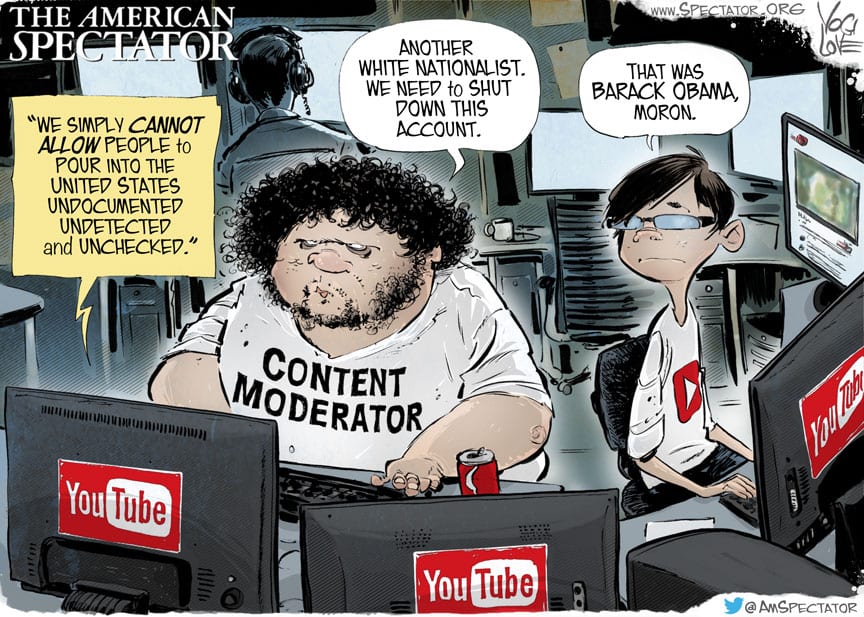 Increasingly feels like we are living in an actual Orwell novel . . .
Anthro's NSFW Thread
Top

Marilyn Synek (pictured above) is a communications specialist who works for the group Nebraska Family Alliance. Wednesday, Synek started her morning with a visit to her favorite coffee shop. While there she was confronted by a trans woman working at the shop who cursed at her and told her to leave and never return. Here’s what happened from Synek’s own Facebook post:

One of my favorite weekly traditions is to start my day at 7 AM with a Cultiva breakfast. I’ve done it loyally once a week since I moved to Lincoln. Today, an employee of the shop approached me and said, “Marilyn Synek! I didn’t recognize you until now, but I just realized who you are, what you stand for, and the work you do. You are f****** bigoted trash, and we do not want you in our restaurant. Over 80% of the people who work here are queer. You are not f****** wanted in our restaurant, so get out and don’t come back! If you do try to come back, we will all refuse any service to you.” The cafe was busy with other customers who watched the incident transpire.

I’ve never broadcasted my political opinions in the shop before, and I have always treated the employees of Cultiva with respect and courtesy. While we, as Americans, can disagree politically, it is very important to maintain civility when interacting with people who hold different world views. Tolerance goes both ways, and the division in our current political climate will perpetuate if we neglect basic civility.

The employee, whose name is Natalie Weiss, was fired shortly after the incident. She described what happened in her own Facebook post:

This morning, while I was working a shift, an employee of the Nebraska Family Alliance, and a former member of Ben Sasse’s campaign staff came into the store. If you’re unfamiliar with Sasse’s, or the Nebraska Family Alliance’s stance on the LGBT2QIA+ community, and our rights as Nebraskans to experience equality under the law and enjoy employment and housing non discrimination protections, I encourage you to look them up. They’re real peaches. Nebraskans like myself do lose our jobs, and sometimes our living arrangements, because of who we are, and people like the Nebraska Family Alliance are why. Their money, their influence, and their national political allies are why Lincoln cannot mount a successful ballot initiative concerning Lincoln’s Fairness Ordinance.

When this person was leaving the store, I told them in no uncertain terms, and admittedly vulgar ones, that they were not welcome to come back. For that, I have lost my employment.

Yes, well, employers do tend to look down on employees shouting vulgarities at the customers. In this case, after firing Weiss, the company called and apologized to Synek for the way she was treated. “We do not condone this behavior and never have,” the store’s owner wrote on Facebook.

In an interview with the Lincoln Journal-Star, Weiss did admit her behavior was out of line saying, “What I did was unprofessional and I certainly would not want to be treated the way I treated that woman today.” Weiss told NBC News that she was surprised she was fired for her outburst:


I don’t think the difference here is all that subtle. Someone who says something intentionally offensive or who puts their hands on you can be asked to leave, perhaps even rudely. Someone who is sitting and quietly enjoying their coffee shouldn’t be screamed at in front of other customers because you don’t like their politics. It’s the difference between civil behavior and progressive callout culture.

It seems that the left is continually preaching about the need for "tolerance" of others.......however that apparently does not apply to those that belong to other tribes.

Weiss was surprised that she was fired?

When a store employee drops the F-bomb on a customer multiple times in public, what choice did they have?
The store did right.
The American Republic will endure until the day Congress discovers that it can bribe the public with the public’s money.
- misattributed to Alexis De Tocqueville

NEW YORK, NY—Adapting to modern times, the Pulitzer Prize, the most distinguished award in journalism, has added a new category: Destroying People.

“It’s time we recognize a key role today’s reporters play,” said Pultizer spokesman Adrian Fuller. “And that’s finding random people -- whether they entered the public eye by making a meme the president shared or by making a donation to charity -- and then doing whatever one can to ruin their lives.”

The award will recognize the hard work of reporters who search through decades-old tweets to publicize anything that could be considered offensive and those who tirelessly locate a non-public figure so he or she can be doxxed. Special consideration will be given if the target is fired from a volunteer position.

Now all they need is a special Pulitzer about using innuendo and making up shit!
Anthro's NSFW Thread
Top

The finger-and-thumb gesture - which is also a popular emoji - is being used by some as a "sincere expression of white supremacy", according to the Anti-Defamation League (ADL).

But the US anti-hate group says the "overwhelming usage" of the hand gesture today is still to show approval or that someone is OK.

Therefore "particular care must be taken not to jump to conclusions about the intent behind someone who has used the gesture".

Other symbols added to the list include burning neo-Nazi symbols, images of the "Happy Merchant" and the slogan "Diversity = White Genocide".

The Anti-Defamation League started its "Hate on Display" list in 2000 with the aim of helping people recognise signs of extremism.

It now has over 200 entries, including the swastika and Ku Klux Klan's burning cross.

"Even as extremists continue to use symbols that may be years or decades old, they regularly create new symbols, memes and slogans to express their hateful sentiments," said ADL boss Jonathan Greenblatt.

"We believe law enforcement and the public needs to be fully informed about the meaning of these images, which can serve as a first warning sign to the presence of haters in a community or school."

The ADL says the OK symbol has become a "popular trolling tactic" from "right-leaning individuals, who often post photos to social media of themselves posing while making the gesture".

It started out as an online joke on 4Chan - taking an innocent gesture and pretending there was a hidden meaning behind it, hoping to trick the media and left-leaning people into outrage.

But the joke was so successful and widespread among the far-right, that many believe the OK sign is changing meaning.

The man accused of killing 51 people at mosques in Christchurch, New Zealand, earlier this year flashed the OK hand sign when he was in court.

He's pleaded not guilty to murder.

Dr Paul Stocker, a historian who specialises in far-right movements, says the OK sign is a way of people who are in the far-right to communicate to each other.

"It's a coded message to people who are in the know and understand what the far-right are doing," he tells Radio 1 Newsbeat.

"That symbol indicates to core supporters that they are one of them."

The writer says it's common for extremist groups to take signs "already in the public domain and twist their meaning".

"The process of finding symbols has accelerated with the alt-right. They operate mainly online and use coded language and memes that might seem innocuous, but if you drill down into them they have meaning."

The Anti-Defamation League is very keen to stress that more often that not, the symbol means everything is OK.

"The overwhelming usage of the hand gesture today is still its traditional purpose.

"As a result, someone who uses the symbol cannot be assumed to be using the symbol in either a trolling or white supremacist context."

Not mentioned in the article, but they have added Moonman to the list too.