That's a good point. Italians wouldn't know who "Fredo" is. It's an american nickname for Alfredo.
Strong supporter of global warming as I have invested in speculative vineyard properties around Nome
Top

chijohnaok wrote:John Kass, columnist for the Chicago Tribune (and part Italian—-or as it’s pronounced in Chicago “EYE-talian) weighs in on the Fredo matter:

The same fact-free meme-slander was used in Nazi Germany and Soviet Russia.

Hiel Trump.
A stupid person is a person who causes losses to another person or to a group of persons while himself deriving no gain and even possibly incurring losses. -- Carlo M. Cipolla

chijohnaok wrote:John Kass, columnist for the Chicago Tribune (and part Italian—-or as it’s pronounced in Chicago “EYE-talian) weighs in on the Fredo matter:


The same fact-free meme-slander was used in Nazi Germany and Soviet Russia.

WOW...those Nazis in Germany were pretty damn clever, given that the "Fredo" slander (to my knowledge) is from the 1972 movie The Godfather and Nazi Germany ceased to exist in 1945. Those time travelling bastards!
The American Republic will endure until the day Congress discovers that it can bribe the public with the public’s money.
- misattributed to Alexis De Tocqueville

WOW...those Nazis in Germany were pretty damn clever, given that the "Fredo" slander (to my knowledge) is from the 1972 movie The Godfather and Nazi Germany ceased to exist in 1945. Those time travelling bastards!

Try to be funny.

First ridicule them and declare them as enemies of the people in the US. In Putin's Russia journalists are murdered.

Now Trump plans to rule the social media by diktat.

PS. Your silent treatment was quite short lived. Average female can do at least one week.

Nolte destroys the NYT...with the help of a secret recording of the editor. Clearly, there was a revolt over a neutral, objective headline that missed an opportunity to harm Trump. It's pathetic. So he has to give a pep talk to the 5 year olds who all threw themselves on the ground and started kicking their feet.


New York Times executive editor Dean Baquet accidentally admitted to the whole wide world that for two years his far-left newspaper was “built” around spreading a hoax.
When I say “accidentally,” what I mean is that he likely didn’t know he was being secretly recorded and that his remarks would be made public.

Slate somehow got a hold of a recording of a company-wide meeting Baquet held with his left-wing staffers, and it is an illuminating look, not only at the fall of the Times’ own credibility, but how the news media in general has been infested with entitled, left-wing cry-bullies who only want to see the media used — not to inform the public — but to propagandize left-wing causes.

What I mean is that the whole reason for this meeting was to placate a newsroom full of babies who are still pouting over that one time the Times did not slam Trump in a headline.

It got trickier after [inaudible] … went from being a story about whether the Trump campaign had colluded with Russia and obstruction of justice to being a more head-on story about the president’s character. We built our newsroom to cover one story, and we did it truly well.

Here’s Baquet admitting the Times will now focus on another hoax, the hoax that Trump is racist:

Now we have to regroup, and shift resources and emphasis to take on a different story. I’d love your help with that. As Audra Burch said when I talked to her this weekend, this one is a story about what it means to be an American in 2019. It is a story that requires deep investigation into people who peddle hatred[.]

The day Bob Mueller walked off that witness stand, two things happened. Our readers who want Donald Trump to go away suddenly thought, “Holy shit, Bob Mueller is not going to do it.” And Donald Trump got a little emboldened politically, I think. Because, you know, for obvious reasons. And I think that the story changed. A lot of the stuff we’re talking about started to emerge like six or seven weeks ago. We’re a little tiny bit flat-footed. I mean, that’s what happens when a story looks a certain way for two years. Right?

Well, why were your readers so disappointed, Dino? Maybe because your godawful paper blew the story, because you handed the reins of a crazy conspiracy theory over to that lying, sea hag Haberman, and for two years you promised your readers Mueller had the goods and Mueller Time! was going to be the end of Drumpf.

But guess who wasn’t caught flat-footed, Dino? Outlets like Breitbart News; that’s right, those of us who knew the New York Times and CNN and the Washington Post were throwing Russian monkey poop, who time and again and again debunked your nonsense, who looked at the evidence (there was none!) and knew immediately it was all a hoax.

You were caught “flat-footed” because you suck at your job, because you are appeasing your rabid customers instead of informing them.

The tail now wags the dog that is the New York Times. For decades the Times went out of its arrogant and sanctimonious way to insult and antagonize right-of-center readers, and now that no one on the right subscribes to the Times anymore, it can either go out of business or appease and cater to its left-wing customer base. So now the customers are in charge, the customers are choosing the headlines, the customers are the true executive editors.

And because there is no intellectual diversity among the staff at the Times, those inmates also run much of the asylum.

Baquet pretty much spends the rest of the 90 minutes meeting fielding questions from individuals who are supposed to be professionals but who only want to know how they can call Trump and his supporters racists even more often.

You see, according to the Times’ staff, everything is racist because everything really is racist.

You probably think that whole “everything is racist” thing is me being sarcastic. Here’s a direct quote from a staffer [emphasis added]:

Hello, I have another question about racism. I’m wondering to what extent you think that the fact of racism and white supremacy being sort of the foundation of this country should play into our reporting. Just because it feels to me like it should be a starting point, you know? Like these conversations about what is racist, what isn’t racist. I just feel like racism is in everything. It should be considered in our science reporting, in our culture reporting, in our national reporting. And so, to me, it’s less about the individual instances of racism, and sort of how we’re thinking about racism and white supremacy as the foundation of all of the systems in the country.

Good grief. What a dispiriting and not-at-all surprising look at the ignorant whack jobs in charge of our media — and in the case of the New York Times, not just the media, but what is considered the elite of the media elite. What are they obsessed with? What do these conspiracy-loons see everywhere in 2019 America…?

Here we sit in the most tolerant, diverse country in the world just a few years after having twice elected a black president with the middle name “Hussein,” and the people in charge of the media are breaking down into pools of self-pity because they want to scream racist at us even more than they already have.

And again, let’s not forget that the only way they can try to pretend America is racist is by way of massive hoaxes: the Very Fine People Hoax, the Covington Hoax, the George Zimmerman Is White Hoax, the Hands Up Don’t Shoot Hoax, the Jussie Smollett Hoax, and the countless hoax hate crimes they spread over and over and over again without scrutiny.

This very same New York Times has no desire whatsoever to cover a truly disturbing rise in antisemitic hate crimes in its own city. And why not? Well, because those crimes are politically inconvenient, are not committed by the correct people.

Again, I’m not being sarcastic… The New York Times openly admits that anti-Jewish hate crimes don’t interest the Times because white supremacists are not behind them [emphasis added]:

If anti-Semitism bypasses consideration as a serious problem in New York, it is to some extent because it refuses to conform to an easy narrative with a single ideological enemy. During the past 22 months, not one person caught or identified as the aggressor in an anti-Semitic hate crime has been associated with a far right-wing group, Mark Molinari, commanding officer of the police department’s Hate Crimes Task Force, told me.

In fact, it is the varied backgrounds of people who commit hate crimes in the city that make combating and talking about anti-Semitism in New York much harder.

So let’s boil it down… The New York Times spent two years spreading a hoax, will spend the next year spreading another hoax about Trump being racist, and has no interest in covering an actual rise in anti-Jewish hate crimes because the haters are not wearing MAGA hats.

You see this mess, and you see the company forced to stop publishing political cartoons because the editorial staff can’t recognize blatant antisemitism, and you wonder: maybe these journalists aren’t qualified to lecture Americans on bigotry?

This isn’t a newspaper. The Times is now a drug dealer out to give the hate-addicted a regular dose of that hate, a hit of the endorphin rush of anti-Trump conspiracy theories…

If you want to know what’s happening in the world, don’t bother with the Times.

But if you’re interested in the fake news excesses the Times’ is willing to prostitute itself with for a buck, click on over.

I love that someone (supposedly) changed the Wikipedia pages for both Chris Cuomo AND The Godfather
The American Republic will endure until the day Congress discovers that it can bribe the public with the public’s money.
- misattributed to Alexis De Tocqueville

That was pretty damn funny.

I once had a horse and mule pack trip guide in the Sierras tell me I reminded him of "Fredo". I was paying maybe 2K for me and my three kids. I was not amused. Even so it was a damn fun trip even though the guide was mostly incompetent and a 5000 lb 8 ft horse slipped on a granite slope and almost fell on me.

Also, the natural hot spring they took us to was surrounded by cow pies. And I fell on a log fishing and broke two ribs but it was STILL fun.

Chris needs to chill out.
Strong supporter of global warming as I have invested in speculative vineyard properties around Nome
Top

Hilarious line about Gov.Cuomo calling CNN and asking for a job for Chris.
Strong supporter of global warming as I have invested in speculative vineyard properties around Nome
Top 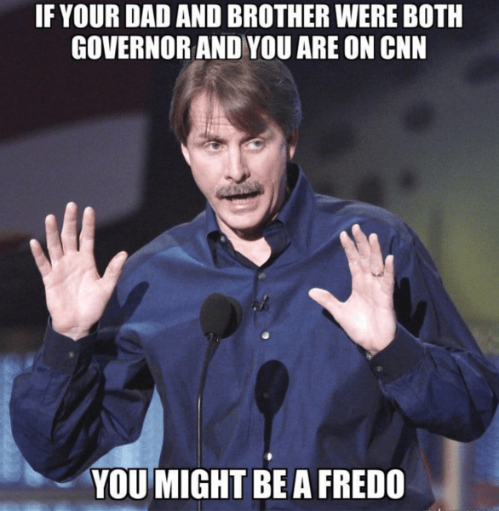 Saw this at Ace of Spades HQ.
The American Republic will endure until the day Congress discovers that it can bribe the public with the public’s money.
- misattributed to Alexis De Tocqueville