I understand the whole 5.56 rifle hobby. I got rid of mine some time ago because I really didn't enjoy shooting it... Too loud... too much muzzle flash.... basically too much rifle for the running around your house or property and shooting at imaginary bad guys hobby....

A shotgun poses the similar problem... too much recoil, blast and noise...... a handgun is a stupid weapon under almost any conditions except as a belly gun imo..... So what would be better.... ?

I'm liking the idea of one these...

.45 so the round is subsonic... a can... a good red dot sight.... I'm thinking if anything is ever going to replace the shotgun behind the bedroom door this is going to be it...

If you don't understand why I'm suggesting this, take your 5.56 rifle out in the dark and fire it without ear protection.....better yet fire it inside a darkened room.... you'd better hope you hit the guy you were shooting at... and that he was alone...
Top

Lately mostly .22LR from several platforms, and .22WMR from a revolver. I bring out the .243 about once per year for sixty rounds of 200 yard refresher. I use the 12 ga every autumn rabther extensively.
"Fuck the king." - Sandor Clegane
"And the story was whatever was the song what it was." - Dire Straits
'Our father, which art in heaven..' "May he fucking stay there." - Al Swearengen, Deadwood
Top

Here's the session last weekend where I verified the holds for the .22LR out to 75yds ... to enable "critter is the reticle" engagement of the tree rats out that far.

Environment: It was 19F this morning, didn't expect that, but warmed up fast. Light breeze from the West, directly behind me. The sun was directly in my face over the target. About a foot to the right over the target

I thru my wet suit top over my head and the rear of the scope to keep the sun out of my eyes.

Activity: Setup at 25yds. First group(G1 on the pic) was left and a tiny bit low. I cranked 3 right and 1 up.
First shot of second group (G2) was a bad miss way to the left. I fired three more rounds and all went in the same hole. I counted it as 2 groups. One with the wild miss (g2) and one without (G3). I cranked 1 left.
Group 4 (G4) was a tad to the left so I cranked 1 right. I realized I was chasing my tail. 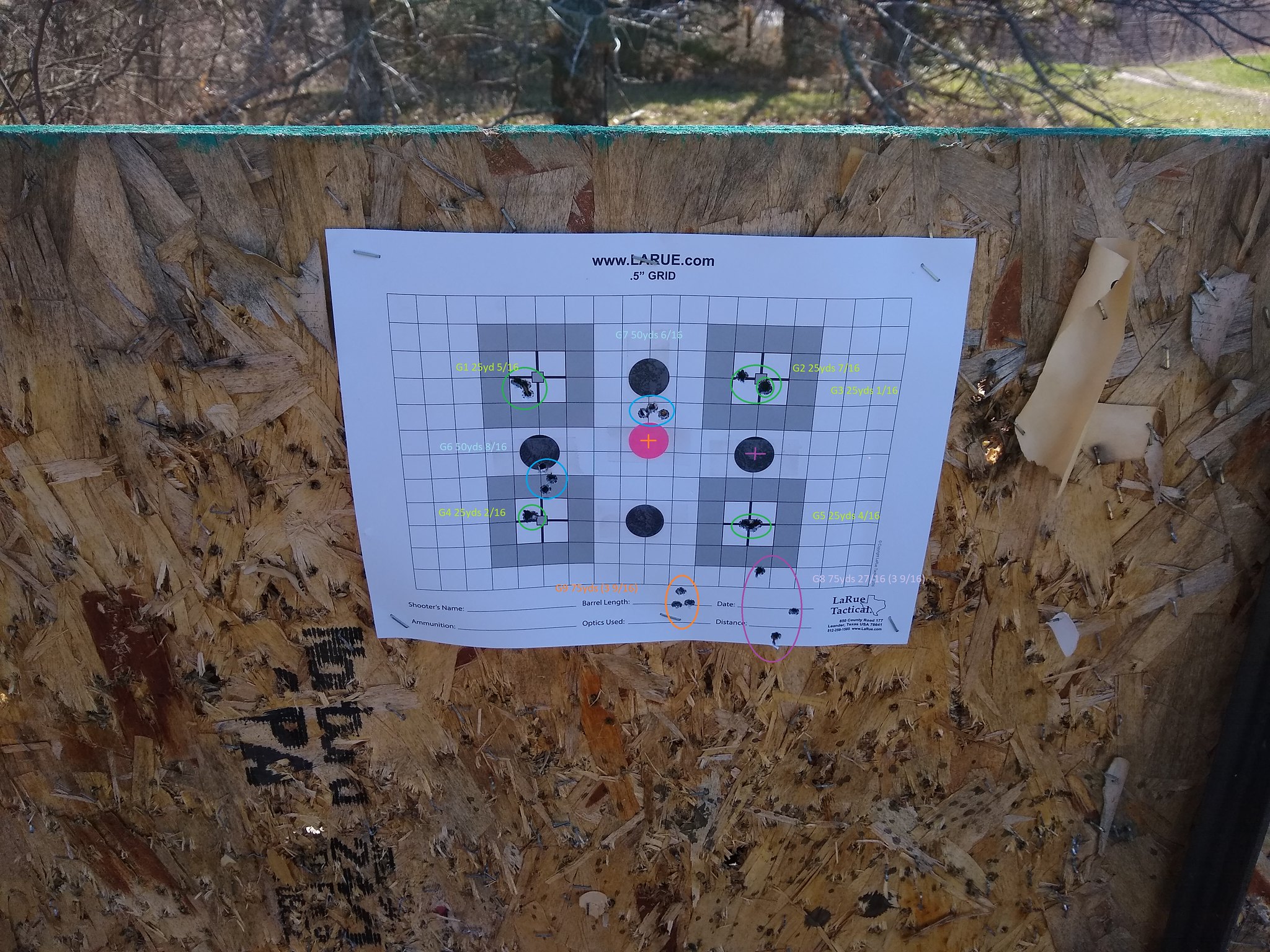 Summary/results:
two rds were bad mmisses ... I think these were breathing/timing. I don't think I was having parallax issues today with this rifle. The tripod was nice and stable. Getting the right height is critical. Too high or too low and you will be straining ... and straining means missing

I am happy with everything except the surprising drop of these rounds. I need to dig into that.
Ugum Bugum Uber Alles - Iddi Ut Amine Dada !!
Top

I haven't had time to hunt deer for several years, so all my Autumn activities are me and the Fudd Gun (a side-by-side 12ga).
"Fuck the king." - Sandor Clegane
"And the story was whatever was the song what it was." - Dire Straits
'Our father, which art in heaven..' "May he fucking stay there." - Al Swearengen, Deadwood
Top

Environment: Breeze from average 150 degrees off the bullet path. Overcast.

Activity: Did 2m wind read from center of our SE pasture, which is about a 50 acre area but has a N-S tree line on the East edge which would be shielding me from the wind. Got

And after throwing 2 tufts of dead grass up in the air, I decided the wind was 150 degrees off the bullet path.

At the 500yd FP I aimed for the face. Fired 3 rds and got 3 hits. I could hear them and see the steel swinging. But I could not see the splotches of the hits. Grey is not a great contrast color. But I'm out of white.

Went down and checked the hits, so I'd know where they were. Crossed the creek on foot at the usual spot and had no issues moving along the slippery banks while holding on to sapplings.

One hit was dead center on the face, another hit was low left on the face, the third hit was on the left side bolt that holds the chain to the target. The is not on the facee, so technically a miss. WHile at the target I measure the wind and got readings between 8.1 and 10.3 and same direction. So the creek was not channeling the wind much today.


Then I rolled up to about 600yds and setup. Ranged distance and got 664 yds. I could feel no wind where I was setup at, but I assumed there was no change on the wind. It seemed to have a steady average and direction. AB said 3.8 mils up. And I held MPH for wind again. First round was high but center of face. I had held too high, well I aimed to high shall we say. So focused on aiming at the "heart" i.e. about 3 inches below the face. And next three shots were heard and seen as hits. I could see some splotch evidence on the lower right of the target.

Then rolled up to about 800yds and setup and ranged 776, 781 and 778 and called it 778. AB said 5.1 up ... and again I held 3 mph. First round was low and slightly right, aligned with the right edge of the face. So, I aimed higher and the low edge of the face and next three rds were hits, though I could not resolve any more splotch. 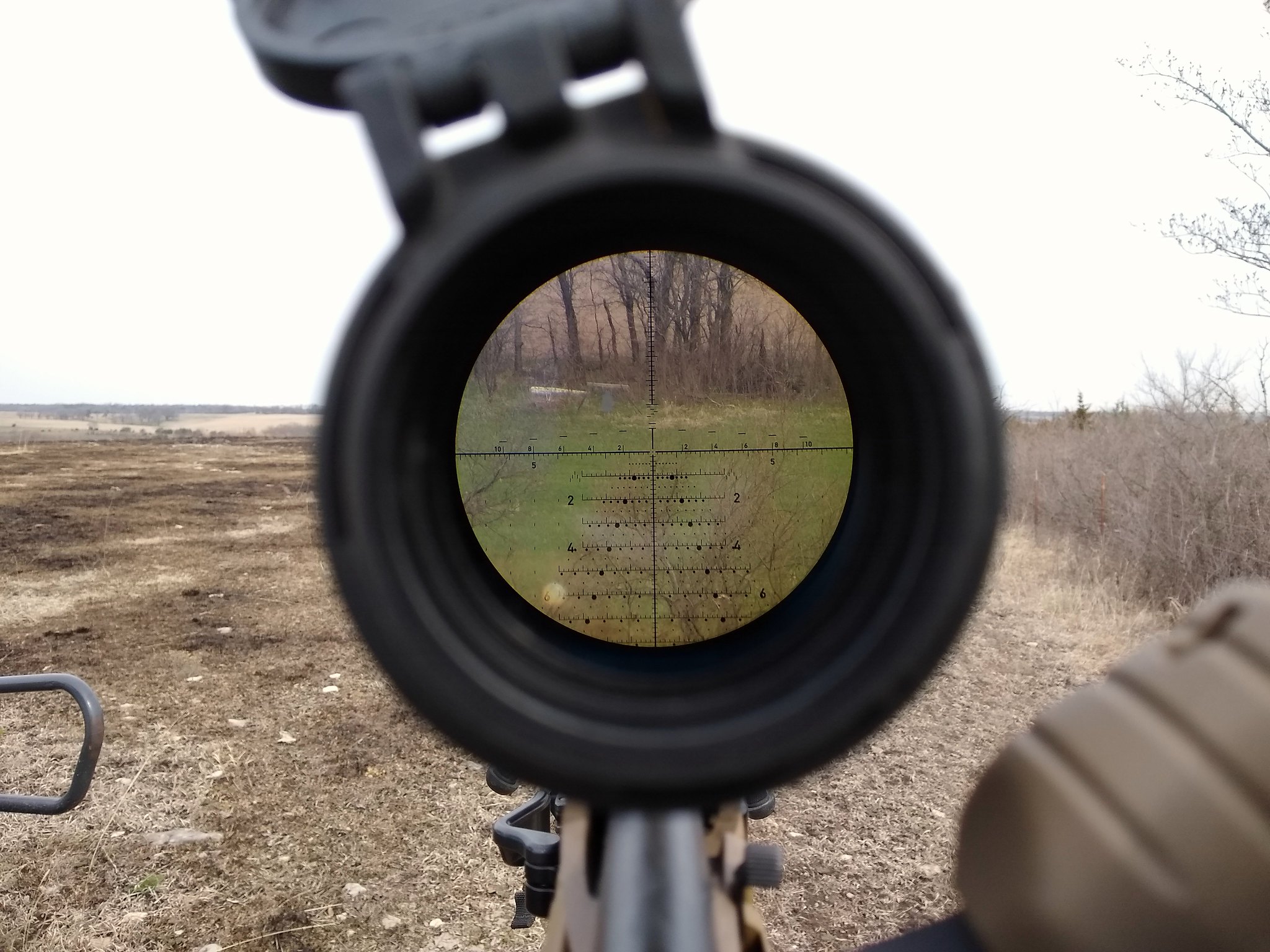 I had seen a what looked like a piece of bone I wanted to investigate, so I crossed the main creek in a different spot, right in the area where we have about 20 foot high soft steep banks. Mother nature is eroding us here, but there is nothing to be done to stop it. She will colapse the banks and that will eventually stop the erosion in that spot, but we will loose 20yds of pasture for maybe 100yds distance.

So crossed that creek then went thru a wood flat isthumus area to another feeder creek and decided to cross that by walking across a large fallen limb. There seemed to be several good branches nearby I could hold on to. Well I made it 80% of the way across and reached for a far side branch and it broke, reached for another and it broke. 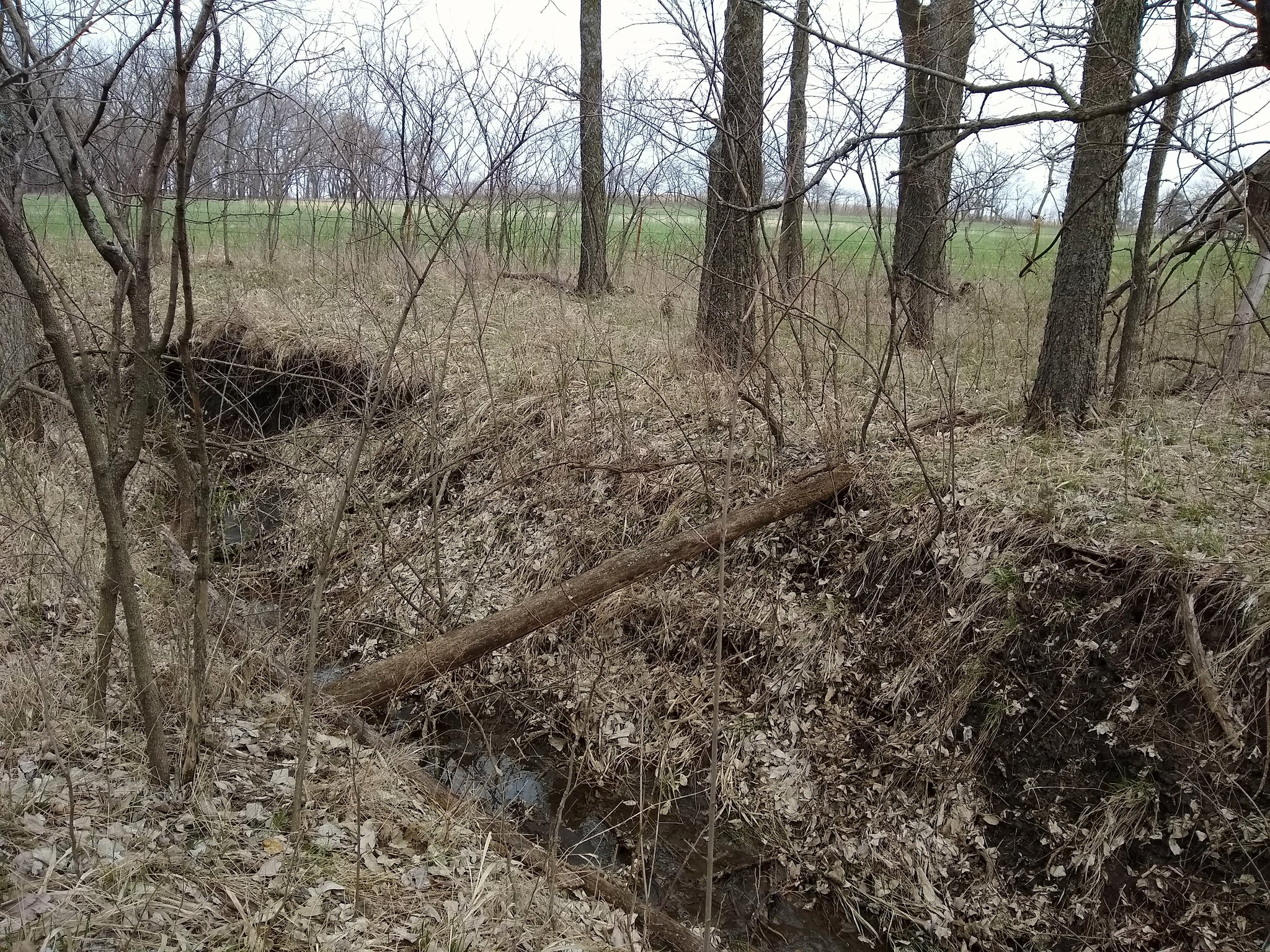 ... but none the worse for wear ... so got up and used other branches to get myself out and continue to the NE brome field where the target is. 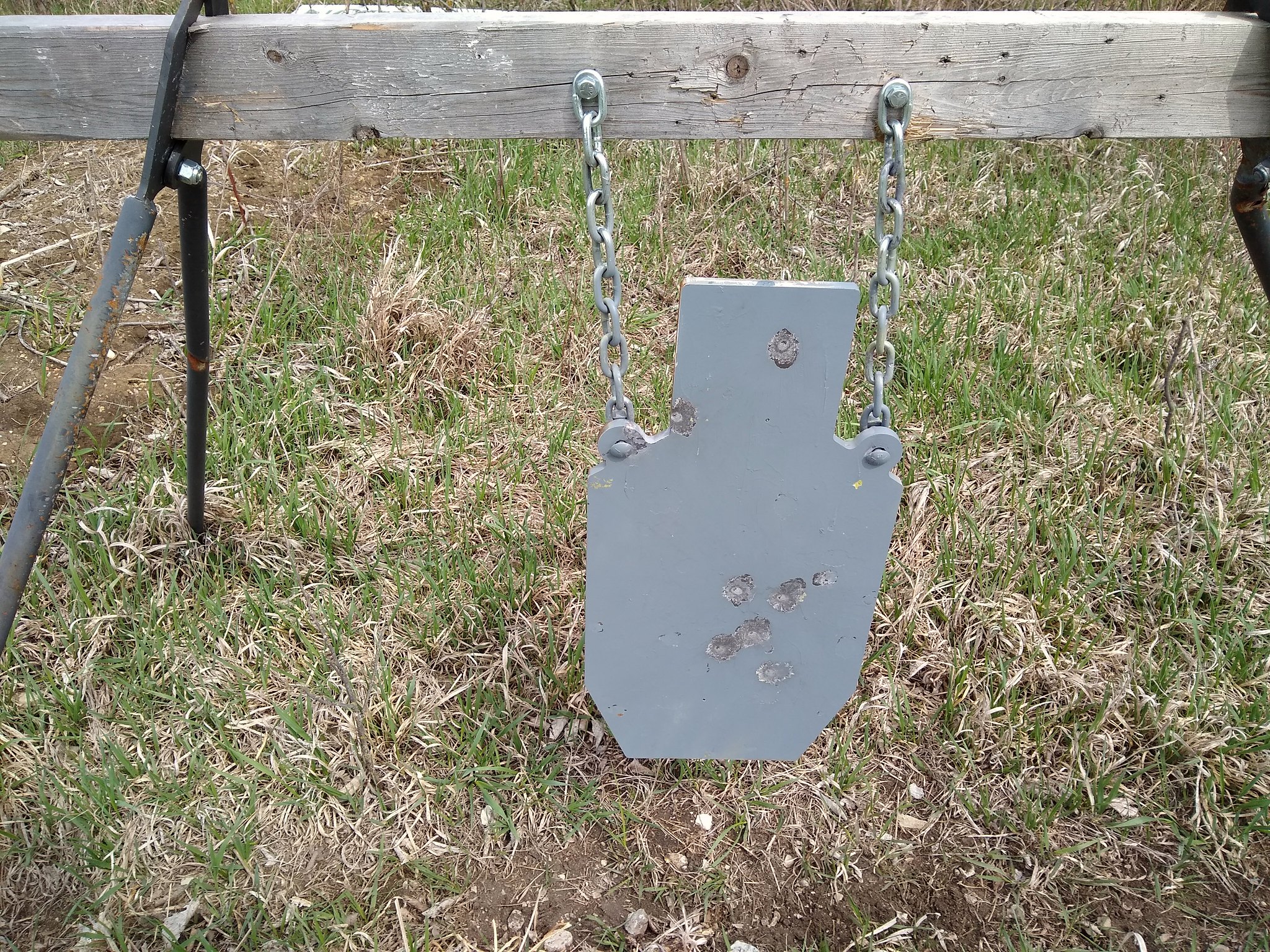 Oh and the "bone" was not a bone but was a white piece of somebodies feed bag.

On the way back I tried cross the log bridge again and made it this time due to better planning on support branches.
Ugum Bugum Uber Alles - Iddi Ut Amine Dada !!
Top 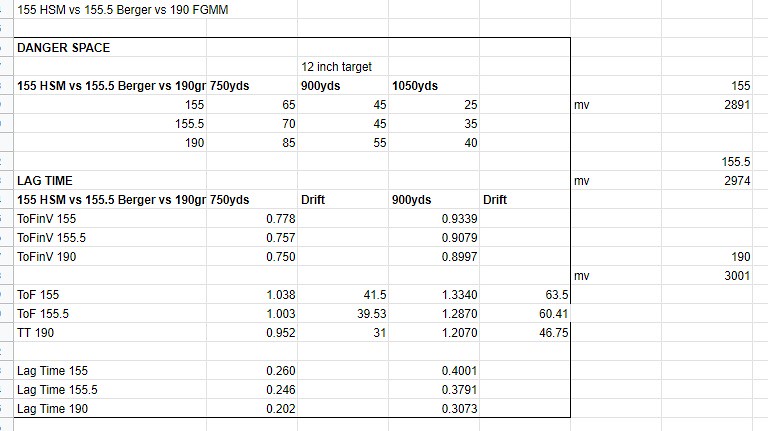 The Berger load (with Berger bullet and Lapua brass), bc(g7) = .239 are competitive. But the berger wins the external ballistics comparison due to the additional 83 fps of MV. But both rounds are impressive for .308 factory

So the berger edges out the hsm on logistics due to availability and as good as the FC brass is, it is hard to argue that Lapua is king.
Ugum Bugum Uber Alles - Iddi Ut Amine Dada !!
Top

Oh, I've looked at it

More extensive comparison, throwing in the 175gr, the bcs and a drop chart (in MIL).
The poor ole 175gr, despite having a higher BC, cannot stay in the game due to lower MV.