jwilkerson wrote:Oh no, they're carrying off the big golden stick, what does that means !!! 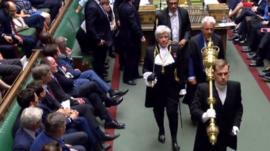 Oh, they are taking it to the Queen !! How about that !

Why does she usually store it on that big table in the middle of parliament ??
Ugum Bugum Uber Alles - Iddi Ut Amine Dada !!
Top

jwilkerson wrote:Oh, they are taking it to the Queen !! How about that !

Why does she usually store it on that big table in the middle of parliament ??

The mace is a symbol of royal authority and without it present the House cannot meet or pass laws.

They are taking it away because parliment is now shut down for the next five weeks so remainers can have a good cry.
I could be the catalyst that sparks the revolution
I could be an inmate in a long-term institution
I could dream to wide extremes, I could do or die
I could yawn and be withdrawn and watch the world go by
What a waste...
Top

Ok thanks !!! I always wondered what the big golden stick was for that sat on that table !!
Ugum Bugum Uber Alles - Iddi Ut Amine Dada !!
Top

Anthropoid wrote:But . . . IS THERE such a thing as a Brexit "with" Deal? I thought the deal that was already on offer from EU was: No deal?

I mean, ffs: the process for withdrawing is all written out in some kind of fucking E.U. documentation isn't it!? The process was started years ago, and it is STILL dragging on and on, and my understanding was the position the current E.U. leadership took was: "Oh sure, you can exit. But it is gonna cost you BIG TIME, and we will hate you forever and punish you for as long and hard as we can . . ." basically Versailles Treaty approach.

The process to quit the EU is actually quite simple. All the UK had to do is at a time of their choosing initiate the Article 50 procedure to leave. By default it would then leave two years later. That is it. The EU actually has no way to prevent the UK from leaving at that point.

Now, of course. The problem is that the UK is internally divided. The public is divided. The political parties are divided. Different parts of the union are divided (Scots and NI voted to remain in EU, England most for Brexit). People are scared what will happen in Northern Ireland with regard to the Good Friday Agreement. Businesses are scared shitless about what will happen to the economy once the UK leaves the single market and customs union. All those internal UK issues are the reasons for the delays, not some dictats from the EU.

Which part of the withdrawal agreement are comparable "Versailles treaty" in your opinion then?

Uh . . . Didn't the U.K. already invoke Article 50? I figured they already had, but that the Eurocrats had identified some loopholes that allowed them to counter and effectively hand the U.K. a big whooping bill, as in "Oh, you are leaving eh? Well then pay _this_ much. That is how much it costs to settle your existing obligations." Thus, the reasons for "deal/no-deals." The "dealing" is about the financial cost and long-term treaty dimensions of a post-Brexit world, no?
Anthro's NSFW Thread
Top

LaPalice wrote:Some people in France, and Macron and those around him might be among them, would like to see Great Britain leaving the EU. Because in their mind, if it is the case, all the financiers in the City will desire to leave the UK and go to Europe, to keep their hand on the EU financial market. And they would like that those financiers choose France, making Paris one of the biggest financial place in the world.

That seems utopian maybe, but a part of the French elites are jealous of the anglo world and the importance it has in the financial world. The French have always dreamt to play a key role in the financial market. That is why there was the Credit Lyonnais bank scandal in the 90's for example.

Otherwise, all over Europe, all the Europhiles want to keep Britain in EU, and I would not be surprised that their intransigence in the discussion are made to force Great Britain to remain in the EU. At least to give a lesson to those who would like to leave.

I disagree. The eurofederalists don't want to keep the UK in, as the UK was always against ever closer political union. This would no doubt be even more true if for whatever reason the EU still don't manage to leave over the next few years.

The UK has historically always been promoting the EU as an economic union, as a single market, as a customs union. Ironically, that appears what they now so desperately appear to want to leave

It seems to me that: "economic unions, single markets, and customs unions" without shared parent sovereignty is the fundamental problem of the E.U. All the E.U. member states are constrained by the decisions of a small group of non-elected bureaucrats who are effectively employees of large-moneyed interests whose geographic (and ethnic/cultural/regional/demographic) biases are in favor of German, Belgian or French nations. Spain, Portugal, Italy, Greece, Czech, etc., etc. are the 2nd Tier status members (or perhaps in some cases 3rd Tier), no? This is why the E.U. has failed, the core goal is nonsensical; you cannot achieve a mutually satisfying economic/market/customs union without also sharing sovereignty; this is why Brexiteers want out, and it is likely also why Remainers want to stay in, i.e., Remainers (as I've already said) either directly benefit from the financial corruption of the system or are fanbois/girls of the system and want a piece of the pie as well.

E.U. should look into some sort of actual democratic system by which all decisions made have to be approved by body of elected representatives from all member states, as well as a Judicial branch and an Executive branch that offer "checks and balances" on one another.

Basically, just do what we Yanks did ~243 years ago: Form a Federal Republic!

John Bercow, Bercow, he knows what to do to. He plays the game hard. He gonna be a star.

Good Lord, this thread can't get any longer without someone mentioning the Bismarck can it. An old reference for you old timers.
Texas, where we have the death penalty and aren't afraid to use it! Build the wall!!
Top

nelmsm wrote:Good Lord, this thread can't get any longer without someone mentioning the Bismarck can it. An old reference for you old timers.

This thread ends when the brexit is done or killed.

Now we watching BoJo do or die.

The best speech on Brexit — from a shocking source

Keep in mind that, according to most of our media (and even more so the European media), we are supposed to regard with fear the German "ultra-right-wing" political party, the Alternative für Deutschland (AfD). Also, keep in mind that we are supposed to believe that the Brexit battle pits Brits against a united Europe that is horrified at their effort to shatter the European Union.

But, in fact, the arrogant, unaccountable transnational organizations, of which the E.U. is a leading example, have served global elites better than ordinary citizens of their constituent countries.

Watch this speech in Germany's parliament, the Bundestag, by AfD's co-leader Alice Weidel, and start to realize that populism is a global force in the highly industrialized world and that the complaints we Americans feel against our elites, and the complaints Brits have against ceding control to the E.U., are all of a piece. She does not hesitate to point her finger at France, which is leading the resistance to a negotiated Brexit.

The video below was subtitled by "Cassius," who maintains a YouTube channel.


The American Republic will endure until the day Congress discovers that it can bribe the public with the public’s money.
- misattributed to Alexis De Tocqueville